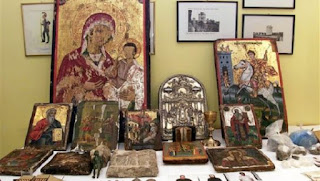 Great religious and historical relics ripped sacrilegious by the…
Holy Church of Agia Paraskevi of the village of Mountain, in the municipality of Pogoni, while they didn’t hesitate to break into a closed house.
In particular, the defilers, which seeks the police, they removed two old gospels, the epitaph, the holy
chalice, a cross, a large picture of the Jesus of the Beautiful Gate, as well as a couple of old banners.
The Mountain is located on border line with Albania and the access to the village is easy from the neighbouring country, through paths.
Only a resident of the village is the farmer Sophia Demetriou, initially realized he had been burglarized in a closed house, and the door of the chapel was open.
Then called the police and when the men of the marker arrived at the village, they saw that it had been compromised and a window of the temple.
The parish priest, father Theophanes, not believe his eyes when he was called by the police to come to the church and saw, as mentioned in the ana-MPA, “ravaged”.
Lately, the sacrilegious have become a headache for the inhabitants and the police.
One after another, the temples, especially in the border municipality of Pogoni, they get in the crosshairs of the villains.
Father Theophanes reveals that although most churches have an alarm, it does not work as a deterrent to Î¹ÎµÏÏŒÏƒÏ…Î»Î¿Ï…Ï‚, as in many cases, they put foam in the siren and it’s not activated.
The few rangers and priests of the parishes of the area, who daily give struggle with insecurity to keep them in their place, seeking protection from the state.