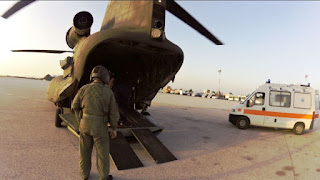 The medevac of a child with a serious health problem was not held on time due to damage to the aircraft…
In particular, yesterday afternoon a few minutes after 15.00 Air Force aircraft landed at the airport of Ioannina with the aim to pick up a child with a serious health problem in order to transfer to a hospital of Athens.
A little before 15.30 ambulance EMT who had received the child accompanied by a doctor from the University of.Hospital arrived at the airport .
After he gave the kid left .Didn’t get a chance to step away from the airport and was contacted to return as the aircraft was facing technical problem.
Indeed, the crew of the ambulance, the AMBULANCE returned to the airport where they awaited for a few minutes.
Then, after the aircraft was not in a position to take off and carry out medevac ,ambulance picked up the child and returned to the University Hospital a few minutes after 16.00 .
Finally with the aircraft pinned down with technical problems , shortly after 21.00 another plane of P.Aviation landed at the airport and just before the 22.00 in the evening the journey of salvation for the child began.
Source