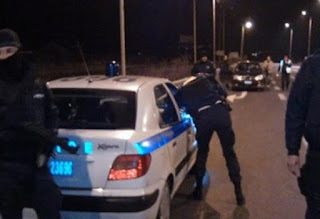 In one case the drugs he was carrying a couple, which he had with him and the 6 year old child…
A large quantity of cannabis, more than 290 pounds, were seized in two police operations in the Greek-Albanian borders and on the national road of Ioannina -ÎšÎ±ÎºÎºÎ±Î²Î¹Î¬Ï‚ while and there were 6 arrests, among them a couple who had been together, and the minor child.
Yesterday, late in the evening, near the airport of ioannina, Ioannina, greece, in research which took place in a car driven by 25-year-old, were found in the luggage compartment of the vehicle, four travel bags, with 56 parcels of raw cannabis, with a total weight of 85 kg and 700 grams. At the same time, the police identified a 36-year-old and his wife, 34 years old, to be ridden in a car, in which they had, and the 6-year-old child and to function as precursors in the transportation of drugs, to avoid police controls.
During the operation, the signal for control carried out by the police in the car of Ï€ÏÎ¿Ï€Î¿Î¼Ï€ÏŽÎ½, the 36-year-old driver did not obey and has developed a great speed, performing dangerous maneuvers. Then abandoned the vehicle and attempted to flee on foot along with the 6-year-old child, but were arrested by the police. Today in the morning, in Leptokarya Filiates, were arrested by officers of the Directorate of Police of Thesprotia, three Greeks, aged 23, 27 and 23 years of age, who with two cars, one of which he had the lead, carrying a quantity of cannabis, a weight of 205 kg and 930 grams. Preliminary hearing for both cases is carried out by the Departments of Dea Igoumenitsa and Ioannina.