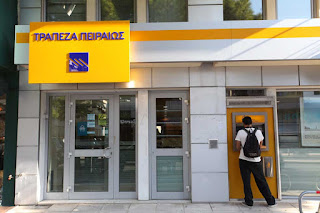 No decision on the new ceo of the Bank of Piraeus was not taken on Wednesday, after engagement with the european supervisory authorities…
According to information, in today’s meeting, the board.p. it was intended to discuss the issue of the reconstruction of the administration of systemic group.
It was decided a new CEO in the bank to be placed, the Cypriot Christos Papadopoulos, following a tender carried out for this purpose, a consultant hired by the Piraeus.
Yes, mr. Smith, had received the “green light” from the hellenic Financial Stability Fund, which has approved this placement.
However, according to banking sources, there have been objections from shareholders – funds of the Bank of Piraeus, which may have spoken to the supervisor of the system, the Single Supervisory Mechanism of the ECB (SSM), to not progress this option.
Indeed, “blocking” of the SSM, who gives the final OK on any changes, cancel this installation.
Resignation Î›ÎµÎºÎºÎ¬ÎºÎ¿Ï…
The Board of directors of Piraeus Bank, although not discussed for the theme of the new CEO, held a meeting and elected the Third mr. George Î Î¿Ï…Î»ÏŒÏ€Î¿Ï…Î»Î¿ as a new member of the Board of directors and Deputy Ceo.
Mr George Î Î¿Ï…Î»ÏŒÏ€Î¿Ï…Î»Î¿ was commissioned and the exercise of the functions of the chief Executive officer, until the completion of the procedures for the appointment of a new CEO.
Mr. Poulopoulos is working as an executive in the Bank for 17 years and is the CFO of the Bank of Piraeus for the last 6 years.
In addition, at the same meeting of the board.P. he resigned from the position of provisional chief Executive mr Stavros Î›ÎµÎºÎºÎ¬ÎºÎ¿Ï‚, who remains a member of the board.Of the Bank.
Source