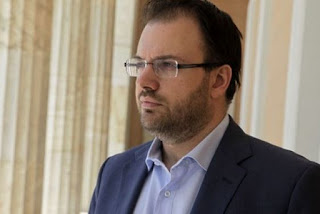 The President of the Democratic Left, Thanasis Î˜ÎµÎ¿Ï‡Î±ÏÏŒÏ€Î¿Ï…Î»Î¿Ï‚, spoke to the Monday, January 4, in the First Program of the Greek Radio, and the journalists Maria Georgiou and George Î Î¯ÎºÎ¿Ï…Î»Î±.
Mr. Î˜ÎµÎ¿Ï‡Î±ÏÏŒÏ€Î¿Ï…Î»Î¿Ï‚ reported to the insurance, as well as at noon today at 16:30 the Minister of Labour, Social Security and Social Solidarity, Georgios Katrougalos, will inform him of the proposal which will be submitted to the partners.
As mr Î˜ÎµÎ¿Ï‡Î±ÏÏŒÏ€Î¿Ï…Î»Î¿Ï‚, has already set the conditions and the proposals in the public debate on the issue, and in particular:
Â· Need a structural reform of the insurance and no veneers.
Â· Without resolving the hot issue of unemployment will not be able to resolve the insurance, not only in the long term, but even in the medium term. The great problem of unemployment is directly related to the Insurance and resolve it.
Â· There should be policies that will create jobs in the private sector, will ensure the existing positions in the Public sector, where there is a difficulty to create new jobs and to have better distribution, so that there is a reduction of unemployment.
Â· Finance, architecture and structure system of the Insurance are the issues which our proposals are specific and will be put to the Minister
Â· Main objective: an Insurance that does not undermine future generations.
For pensions
Mr. Î˜ÎµÎ¿Ï‡Î±ÏÏŒÏ€Î¿Ï…Î»Î¿Ï‚ stressed that the reduction of pensions is not a solution, but aggravates the problem, creating impoverishment and recession. There must be a system of single, which combines long-term viability and social effectiveness, to ensure the disappearance of inequalities, privileges, distortions, waste and opacity.
Contributions:
The abolition of the NCAA, the falsification of the State’s participation in the social insurance and the increase of contributions is not a solution. The increase of contributions creates the worst conditions in small and medium-sized enterprises, which many are pre-gate closure and keep with difficulty workers. There is, namely, the risk of creating the opposite effect on unemployment and the closure of the business. We need to get out of the vicious circle of recession and unemployment. It is unacceptable that the proposals reportedly made by the partners and the Committee of experts of the Ministry for the income criteria and the main pensions.
I’ll have to take a position on the basis of our positions and the official proposal of the government
Main objective of an Insurance that does not undermine future generations. For so long we ask for a concrete proposal from the government. We don’t do sterile opposition and we have supported some of the bills brought by the Government, but voted against socially unfair and ineffective measures, and bills. So far, we’ve only had leaks for the insurance, when informed responsibly by the Minister, and we officially have the proposal in our hands, we will be able to speak responsibly, as we always do, on the basis of our positions that have already mentioned.