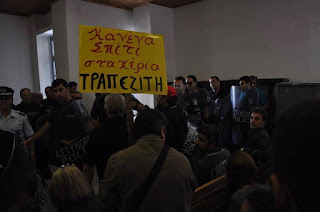 Read the announcement: “The people Stop Paying attended and the Wednesday justice of the peace Court of Heraklion, where it was auctioned off by the Bank of Attica, a two-storey building on the Peninsula of Heraklion with a starting price of 125,000 â‚¬ from a businessman who owed money to the irs,the bank of Attica and its employees.
At this point, to mention that the businessman had come to an agreement with the workers so that if you presented an offer for the property,then the money from the auction to go for the repayment of the accrued of the employees.Finally,there was no bid, so the auction is proof to be barren.
The people Stand Payments will continue to be located and the new year,and for as long as it takes,justice of the peace Court of Heraklion in order to prevent the rapture of the property of the people by the banks and the state a robber.
While we would like to emphasise that with the new year the race gets bigger as the movement is developed now in pancretan level.
Finally, we would like to wish all the Greeks in 2016 to find us in a country Free and Democratic.”