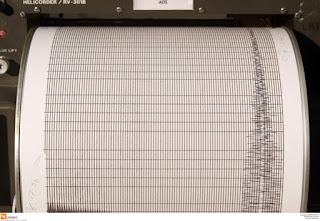 “In such cases, it is a fact that the seismic research Institute is on alert, and the scientific community is watching the phenomenon with great interest.
It is rare to have a swarm of earthquakes 5 on the richter scale in Greece and personally I give a special interest,” said the Director of Research of the Institute of geodynamics Î“ÎµÏÎ±ÏƒÎ¹Î¼Î¿Ï‚ Was.
In accordance with the seismic research Institute of the earthquake of magnitude 5 on the richter scale, which occurred earlier had a focal depth of just 5 km and the epicentre was 56 km Northwest of Mytilene, in the area of asia minor Î¤ÏÏ‰Î¬Î´Î±Ï‚ across the north of Lesvos.
This is the fourth earthquake with intensity more than five on the richter scale in the last week and always the same focus…
Communication of the Institute of geodynamics
The official communication issued by the scientific bodies for the earthquake that was recorded prior to about an hour in the area of Mytilene.
On behalf of the four agencies establishment of the National Seismological Network, the seismic research Institute of the National Observatory of Athens announced that “today at 15:48 time in Greece, a seismograph the recorded Strong earthquake, with a magnitude of 5 degrees on the Richter scale, which is derived from a distance 273Î§Î»Î¼ NE of Athens.The focus of the vibration detected 60 km NW of Mytilene”
With information from ana – MPA