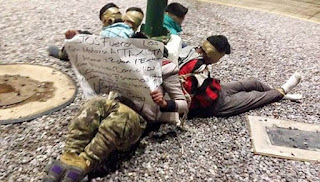 Five members of the infamous…
drug cartel Nuevo Cartel de Juarez arrested – stunned – by the police in the city of Cuauhtemoc in Mexico. Surprised because he found them tied to a lamppost! The five – who are considered suspects for the murder of cab driver at the beginning of the week – spotted first the passers-by, who alerted the police. As told by the eyewitnesses, five of them were gagged, they were blindfolded and were tied with rope and tape it on the lamp.
In one of the five of them had stuck, and a “sign” that he looked like he belonged in that cartel. The authorities are now trying to figure out who got them and if it is for members of a rival cartel, or perhaps of its own. The gang is based in Ciudad Juarez, on the border with tosh the U.S., which is considered to be one of the most dangerous cities in Mexico precisely because of the action of the drug cartel. According to local media, the five men were shocked but unharmed. The cartel Nuevo Cartel de Juarez, it is estimated that a profit of 200 million dollars a week – the 1% of which goes to bribes.
Source