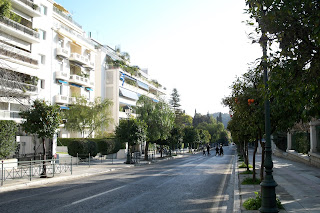 For the first time ever, the street of Herodes Atticus, closes…
and for pedestrians! The occasion of the fact that within a day there were two incidents with protagonists protesters almost outside the door of the prime minister’s office!
This shows that the security men especially these days with the turmoil that prevails due to insurance, I can check all those who pass in front of the Maximos Mansion. It is noted that the passers-by who want to use the Herod Atticus are now called upon to make the circle in order to reach their destination!
The two incidents
The most recent incident happened shortly after 12.30 p.m. when three women who participated in the course of the NAT out of the House headed out of the Maximos Mansion and tried to raise a banner with their demands. The three women were surprised, and again the guard of the Palace, Maximus, and as soon as the cops realized what was happening they’ve been removed and not left to open the banner. The protesters earlier was out of the House and protested along with other colleagues.
Source