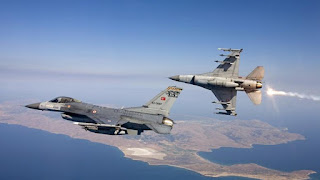 In an unprecedented challenge…
proceeded to the TEAK when Turkish fighter got too close to the aircraft that was carrying the minister of DEFENCE E.Burnt and Dutch counterpart Jeanine Hennis-Plasschaert and minister for Migration of Netherlands Klaas Dijkhoff and attempted to Ï€Î±ÏÎµÎ¼Ï€Î¿Î´Î¯Î¿Ï…Î½ its course to the island of Chios.
The premise of the event made it yesterday in a tv channel during the broadcast the minister of national DEFENCE, P.Glowing, who reported that the Dutch defence minister she was in shock with what he saw as an eyewitness to the harassment of the Turkish F-16 which intercepted fighter aircraft of the hellenic Air Force. H Turkish challenge does not happen by chance as it was intended to give a message to the Dutch ministers of, condominium of the Aegean sea and that Ankara does not recognize the 10 miles.
He the minister of national DEFENCE underlined that “if (the ministers of other countries-members of NATO and the EU) don’t see it, don’t understand what you repeatedly call them for violations of national airspace, as they have the impression that we tell them exaggerated stories, but now the Dutch minister now has a personal view of the proceedings of the Turks, and what’s going on ÎºÎ±Î¸Î¼ÎµÏÎ¹Î½Î¬ of the Aegean” On the issue of refugees also added that the ministers “saw who smuggle refugees and migrants” and made it absolutely clear that Greece is not going to perform joint patrols with Turkey.
“If they want to make patrols at the external borders, i.e. in their own territorial waters, let them come to the do’ it is Noted that the two Dutch Ï…Ï€Ï…Î¿ÏÎ³Î¿Î¯ made an official visit to Greece, and visited Greece, Chios and Agathonisi. In Chios, visited the reception point (hot spot) and registration of refugees in Farmakonisi was the basic information from the head of the outpost, while in the Agathonisi met with the local authorities.
Source