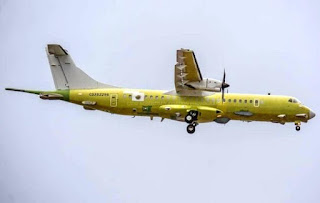 The successful completion of the virgin flight of the new aircraft…
maritime patrol â€“ anti-submarine warfare (ASW: Anti-Submarine Warfare) the ATR 72-600 TMPA (Turkish Maritime Patrol Aircraft) in the facilities of the Turkish Aerospace Industries (TAI) at Akinci, Ankara, announced a few days ago the ministry of Defence of Turkey.
The development and production of this aircraft is part of the third phase of the programme, Meltem III, which aims to delivery in the Administration of Naval Forces of Turkey (TDK: Turk Deniz Kuvvetleri) six aircraft maritime patrol â€“ anti-submarine warfare to the satisfaction of the relevant operational requirement.
It is recalled that the Italian Alenia Aermacchi has an agreement with the Turkish ministry of defence industry (SSM) for delivery in TDK two aircraft ATR 72-600 TMUA (Turkish Maritime Utility Aircraft) and six aircraft ATR 72-600 TMPA. The program, a crucial role will be played by the TAI throughout the operational life of the aircraft.
The ATR 72 TMPA is the Turkish version of the ATR-72 ASW which the manufacturing is characterized as high efficiency, medium-sized aircraft, anti-submarine warfare with competitive price acquisition and operating costs.
It is a specialized version of the aircraft, regional transport ATR 72 produced by the franco-Italian joint venture ATR (Alenia Aermacchi / Airbus). The ATR-72 TMPA is equipped with the construction of Thales dispatch system AMASCOS (Airborne Maritime Situation & Control System), automatic identification system [traffic] (AIS: Automatic Identification System), data link, Link 16, and weapons such as torpedoes Mk.54 and Mk. 46.
In the context of the programme, Alenia Aermacchi is responsible for the design and development of conversion of the platform as well as the installation of the system mission, and system integration.
The Thales has taken over the duties of the head of the electronic systems marine, while the TAI performs the conversion of the platform to ATR 72-600 TMPA. The first ATR 72-600 landed at the facilities of TAI in Akinci in April 2013 and began the work of conversion.
Based on the existing programming of the first ATR 72-600 TMPA will be delivered to the user in February 2017, and the certification will be done in Italy under the responsibility of Alenia Aermacchi. The remaining five aircraft to be delivered in 2018.
The typical missions that you will undertake the ATR 72-600 TMPA’s submarine war, naval surveillance, surveillance activities (fishing, mining, etc.) in the Exclusive Economic Zone (EEZ), search and rescue, control of smuggling of drugs and goods, dealing with piracy, and environmental surveillance.
The standard equipment includes electro-optical sensors, radar research, a system of electronic support measures (ESM: Electronic Support Measures) sensor detection of magnetic anomalies (MAD: Magnetic Anomaly Detector) system, communications including data link, integrated self-protection system (receiver warning radar â€“ RWR, receiver, laser warning â€“ LWR, launchers consumables [Î¸ÎµÏÎ¼Î¿Î²Î¿Î»Î¯Î´ÎµÏ‚ â€“ Î±ÎµÏÏŒÏ†Ï…Î»Î»Î±]), the system of remission Î·Ï‡Î¿ÏƒÎ·Î¼Î±Î½Ï„Î®ÏÏ‰Î½ and anti-submarines torpedoes to two points of suspension on the side of the fuselage.
Source