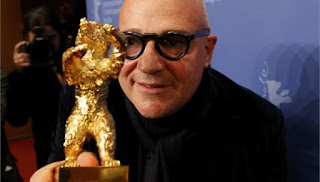 The Golden Bear for best film of the Berlin film festival and won the documentary of Italian production…
“Fuocoammare” of Gianfranco Rossi, who deals with the drama of refugees in Lampedusa in Italy.
The documentary describes the daily life of the residents of the island and that of the thousands of refugees arriving by sea in the disastrous conditions, many of whom lose their lives.
“I hope that this film will be able to help in order to understand that it’s not normal for people to die during their trip to our country,” said Rossi after they received the award, which he dedicated to “the people of Lampedusa”.
“At this moment, all my thoughts are on those people who were never able to reach the
Lampedusa” added the director, who was honored with the Golden Lion in Venice for another documentary, “Sacro GRA”
H Silver Bear for best actor at the Berlin Film Festival was awarded to the Tunisian Madge Fucked for the interpretation of in the movie “HÃ©di”, the first movie Arabic production, which participated in the competition section of the Berlinale in the last 20 years. The Trip awarded tribute “to the people of Tunisia” and the “martyrs of the revolution” of 2010 – 2011 in Tunisia, has just received the award.
H Danish actor Î¤ÏÎ¯Î½Îµ ÎÏ„Î¯ÏÏ‡Î¿Î»Î¼ was honored tonight at the Berlin Film Festival with the Silver Bear for best actress for her role in the movie Kollektivet.
In addition, the Silver Bear for best director at the 66th Berlinale was awarded the French A Hansen’s Love for the film The Future (Lâ€™ Avenir).
Source