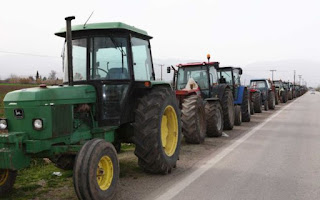 Be back in force in January, are threatening the farmers of the…
Race committee of Farmers, Feed and young farmers Larissa,warning implicitly but clearly the members on the stand who will adhere to the issues that concern them, such as broadcast SUNDAY.
The farmers, who since yesterday have lined up their tractors on either side of the provincial road Î Î»Î±Ï„Ï…ÎºÎ¬Î¼Ï€Î¿Ï…-Holy in the height of the node Î Î»Î±Ï„Ï…ÎºÎ¬Î¼Ï€Î¿, they have accounted for gameday action for the two months that passed. With the participation of representatives from the city of Thessaloniki, Kozani and Fthiotida, they assembly at the specified point on the road, which stopped traffic for about 20 minutes, protesting the measures that are being promoted for the sector in the context of the 3rd Memorandum. And yes, as you point out, in one of the most difficult years for the production of low prices, lack of liquidity and suspension of payments from the side of the state, conditions that lead to the primary sector in a big dead end.
After the completion of the assembly, the farmers left with their tractors, promising to be back in force in January, after a nationwide coordination, and a meeting will be held on 7 January in Athens.
As pointed out in a resolution that was adopted, “the government refuses to dialogue, it insists the measures that rip us off and they put a tombstone in the development of the primary sector.”
The key demands of the farmers of Thessaly and the whole of the country concerning:
-The cost of production
-The insurance
-The tax
According to calculations, the 2016 and 2017 on the basis of the memorandum, requested by farmers and breeders to pay taxes, and cuts of approximately 2 billion euros. “We believe that this decision is unjust and developmental” label.
“We are deciding in January to have everyone back together again, united in a possible big race with tractors on the streets”, reported, among others, in their resolution.
Feature is that the resolution contained an indirect but clear warning, and to the members concerning the stance towards the agrarian question, which becomes clear with a series of questions that address the farmers, who point out:
“Greek members,
why do we have to vote to convict in poverty?
why must we cultivate it?
why should I not be able to live?
Why do we have to lose our fields, our homes and the machines?
These political choices we reject, condemn and fight them.”