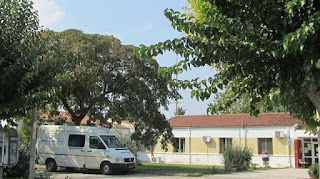 According to a survey of the court held negligence – Tragic shortages of ambulances and staff…
In the “black list” of deficiencies in the field of health and in particular in the field of evacuation of myocardial is one of the Magnesia. The research that has been done the pan-Hellenic Federation of Workers in the Hospitals, the area of “featured” in the first positions with regard to the problems that exist in the evacuation of patients, due to deficiencies in the crews of ambulances.
The court held negligence complained of the Health Department, and sounded the alarm bells by citing specific incidents in which patients were left “exposed and helpless for a long time before a medivac with private means, by grace, that there were crews on shift.
At the same time, in the absence of money for the maintenance of the ambulance, the EMTS, the administration asked him to “returned” the brand-new ambulances that had been received with joy ‘after palm Sunday and the branch” Health Centers Zagora, Origin, and Skopelos.
The map of gaps
The desperate situation into which it has fallen the equipment of the ambulance notes, the court held negligence in a new communication adopted yesterday, and which includes in the “black list” of deficiencies and Magnesia characteristics indicating examples of the at velestino junction, Skiathos, and Salt.
In particular
Health center at velestino junction: does Not have an ambulance all the shifts, due to a lack of crews, ambulance notes, the court held negligence that having records various incidents that have occurred in the last period refers to an incident where an ambulance was called by K.Y. Velestinou to transfer a cardiac incident in the Health Center . But because the ambulance was not on shift due to a lack of crews, the emergency was transported by private vehicle initially to the Health Center at velestino junction, and after an ambulance was called the EMTS Volos, was admitted to the Hospital of Volos. The patient finally, 58 years old, died in the Hospital of Volos. “He played a role in the delay or not Ministers in the government?” wonders the court held negligence
Health center of Skiathos: Also has crews ambulance. On Wednesday, 12 October employee of the Municipality of Skiathos without any training in evacuation, was chosen to carry the patient, emergency, need of ambulance to a large Hospital of Thessaloniki (testimony of a Physician K.Y.).
“What will happen the next time, wondered the Doctor.Y. Skiathos, which will happen in a more urgent emergency? What they have to say for this administration of the AMBULANCE and Ministers of Health?” the question posed by the court held negligence.
Health center Salt: does Not have an ambulance all the shifts due to lack of crews, ambulance. Reference is made to the tragic labour accident with three dead in the mill of the family Î£Î¹Î±Î¼Î±Î½Î¯ÎºÎ¿Ï… with the label of “The wife of the owner called an Ambulance to the Health Center of Almyros. In vain. I had an ambulance on the move due to a lack of crews, ambulance on the afternoon shift. Triggered the Health Centre and was invited by my colleague in the morning shift. But the delay (1.5 hour) claimed the lives of two people. They died from the fumes the alien worker and the owner. They lived only two sons. If there was a ambulance, they could have saved everyone or not Ministers in the Government?” also asks the court held negligence.
Deficiencies in the AMBULANCE
According to the association of workers in the AMBULANCE due to age of vehicles has repeatedly been put to the administration the matter of the renewal of the fleet of ambulance. Last qualified for the solution to enhance the EMTS with ambulances new that they had received Health Centres in the region such as the Zagora, Argalasti, Skopelos and Skiathos. In such a prospect reacted and insist to react to the local communities and the municipal authorities are stressing that this would further exacerbate the negative situation due to the stripping in staff and equipment of Health Centers.
Source