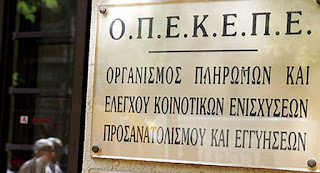 In 112.000 is the number…
of the farmers who has not yet received the first dose of the basic payment. As stated today by the OPEKEPE, the majority of these, around 90,000 producers are entitled to a basic payment of less than 250 euro and the european regulation does not allow for the payment of the. These producers, if either the payment of the “greening” or by the granting of coupled aid fill the 250 euro as eligible for aid, will receive in full the money. If you don’t complete 250 euro, then, according to the rules I will not receive aid, as had been the case last year, with the previous regime.
For the rest, about 22,000 producers is in progress, the control of requests for changes in the entitlements basic payment and the check for the â€œactive farmerâ€ by the ministry of Finance. Those who fall into these categories, the OPEKEPE can’t include them in the payment and will notify them about the completion of the checks, so they will get then money to which they are entitled.
It is recalled that 90% of the winding-up of the basic payment received last Monday a total of 564.000 farmers from the total of 676.000 producers for which they were issued temporary permissions. With regard to the reductions which saw several producers on the amounts credited to, first indicate that the budget of the new CAP is 15% smaller compared to the “old”. In addition, variability observed by area or per crop in relation to what it received from the producer under the previous regime, due to choices made in the previous years with regard to the application of the CAP, such as, for example, the choice to split the country into three regions (crop, tree, pasture).
“Aggrieved” is displayed and the new entrants to the profession farmers by paying them smaller amounts in relation to the “old” farmers that have the same cultivation, in the same area, especially in the first years of implementation of the new CAP. Sources in the ministry of Rural Development indicate that this is also due to the choices made at national level regarding the application of the CAP and note that in the context of the new Rural Development Programme included specific measures to aid young farmers.
Source