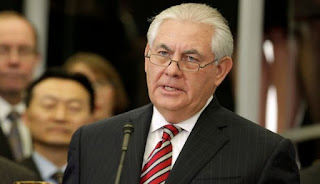 In Germany, for the Meeting of the G20 is the American minister of Foreign affairs Rex Î¤Î¯Î»ÎµÏÏƒÎ¿Î½, in the first of the…
trip abroad in this capacity. The Î¤Î¯Î»ÎµÏÏƒÎ¿Î½ is expected to confirm that the US remains committed to NATO, at the meeting of Foreign ministers in Bonn.
The American minister will have a meeting with his Russian counterpart Sergei Lavrov. According to us officials, the intention of the Î¤Î¯Î»ÎµÏÏƒÎ¿Î½ is to listen to their partners in the G20. However, the meeting with Lavrov is the one that pulls the most attention.
The Î¤Î¯Î»ÎµÏÏƒÎ¿Î½ expected to seek “pragmatic and constructive cooperation” in areas where overlap of our interests, said an American official in Reuters. In accordance with the same counter-terrorism is an area in which the American minister hopes to develop “channels of cooperation”.
From the side of Sergei Lavrov, it is estimated that you will point out to the Î¤Î¯Î»ÎµÏÏƒÎ¿Î½ the importance of repeated reports of the American president Donald Trump for improvement of relations with Russia. Senior State Department official, however, said that the Î¤Î¯Î»ÎµÏÏƒÎ¿Î½ will not soften the position of Washington concerning the involvement of Russia in Ukraine, a crisis that remains unsolved, according to the BBC.
The head of the State Department will also have a meeting with the British counterpart, Boris Johnson, with American officials to stress that it will support a realistic Brexit, which would result in a strong Britain and a strong EU.
At the Meeting of G20 participating developed and developing economies and among them Russia, China, India, Indonesia, Mexico, South Africa and Brazil.