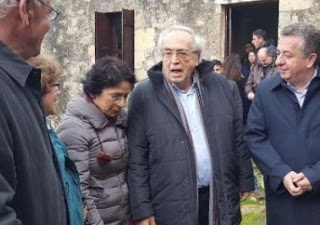 In Crete is from yesterday the Culture minister Aristides Baltas who…
Ï€Î±ÏÎ­ÏƒÏƒÏ„Î· at the opening of the ancient theater in the Ancient city of Aptera in Chania.
It is a theatre which had been destroyed almost the entire early last century, and after several years was restored.
Mr. Cleaver appeared excited by the work that has been done at the ancient theatre.
Today the inauguration ceremony at the Archaeological Museum in Halepa
Today the minister of Culture will visit the new building of the Archaeological Museum in Chalepa, where we will inaugurate the exhibition “The Archaeological Museum of Chania from the 19th to the 21st century: An adventurous path in space and time”.
Along with mr. Cleaver is located in Chania, the general secretariat of the ministry of Maria Î’Î»Î±Î¶Î¬ÎºÎ·.
Source