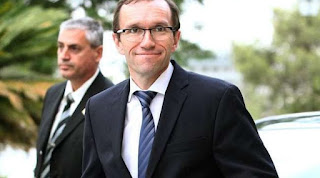 In Athens is located today, the Special Adviser to the Secretary-General of the United Nations on Cyprus, Espen ÎœÏ€Î¬ÏÎ¸ Ida, in order to meet with the minister of Foreign affairs Nikos Kotzias. The meeting is set for 3: 00 in the afternoon at the ministry of Foreign affairs and at its heart will be the latest developments in the negotiation between the Greek cypriot and the Turkish cypriot side for a Cyprus solution.
In all the meetings of the two men during the first visit of mr Ida in Athens last June, and this on the sidelines of the General Assembly of the United Nations in New York last September, mr Kotzias, raised explicitly, by the Greek side, the issue of guarantees and the need for the withdrawal of occupying forces from Cyprus, as a fundamental condition for the solution of the Cyprus problem.
The same position around this issue has been raised by the government of cyprus, unlike Turkey, which insists on maintaining the guarantor powers.