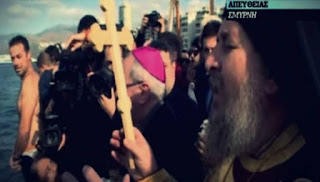 The celebration of the Epiphany in Izmir after 94 years, was the opportunity to…
gather on the historic waterfront of the city, descendants of Greek families, Turks, westerners living in Turkey, and dozens of Greeks and visitors from Chios and Mytilene.
The few members of the community and the orthodox of the region conducted for the first time freely with the ceremony of the blessing of water in the open space, after the official permission obtained from the Turkish authorities.
The blessing was officiated by father Kirill, the first orthodox priest, who works permanently in Izmir after the destruction and the uprooting of 1922. From 1990 he was occasionally functions as there never was a stationary priest in Izmir until August 2013, when the Ecumenical Patriarch mr. Bartholomew’s entrusted the permanent position. Focus of church life is the church of Agia Fotini.
The church was an old Dutch church, but after the September 1955 the Dutch took the remains of their ancestors, and they left. Later, the then Greek government has asked to rent the church for 99 years, and in 1981 it was renovated and converted to the orthodox church that worked Christmas and Easter.
The celebration was at 8:30 in the morning with the divine liturgy in the Agia Fotini, while at 12:30 was held and the blessing of water and the diving of the Holy Cross in the port of Izmir, opposite the old Greek consulate.
“Today we felt the continuity of our history through this ceremony,” said Archimandrite Kirill Fig, which was officiated by the holy water.
He said Tuesday to the Star: “it’s a touching and shocking at the same time fact. I talked a little with the kids who would dive to catch the Holy Cross and told them to know that you do not dive to catch only the Cross, but will Î±Î½Î±ÏƒÎºÎ±Î»Î­ÏˆÎµÏ„Îµ to the sea, to feel our ancestors that is in this exactly what is happening today”.
In Istanbul, the center of Orthodoxy, the Ecumenical Patriarch Bartholomew celebrated the great holy water the waters of the golden horn on the beach in front of the headquarters of the Ecumenical Patriarchate in Fanari.