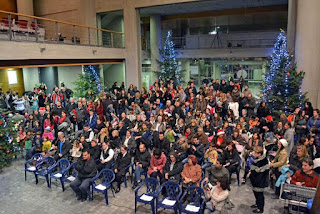 Î”ÎµÎºÎ±Ï€ÎµÎ½Ï„Î±Î¼ÎµÎ»Î®Ï‚ group of volunteers, students and… graduates from the Department of Educational and Social Policy (SSP), as well as from the Department of International and European Studies (DES) of the University of Macedonia, actively participated in the making of the christmas event “Elves in Action” under the auspices of the Î‘Î½Ï„Î¹Î´Î·Î¼Î±ÏÏ‡Î¯Î±Ï‚ Social Policy and Solidarity, Municipality of Thessaloniki, which was held last Saturday 12 December 2015, in the lobby of City Hall.
For the organisation of the volunteers, coordinator, candidate of the Department of SSP, Nikolaos Papathanasiou and assistant professor of the Department of SSP, Joan Papavasiliou, have worked since last October with pupils of 87Î¿Ï… Primary School of Thessaloniki and the Special Entertainment Workshop (TRAVELED) of the Municipality for adult persons with disabilities.
The event was a great success, as he engaged a crowd of people of all ages. Among other things, for young children were organised by the volunteers workshops christmas construction, it was a show Clown and read fairy tales, while about 30 members TRAVELED “bewitched” the audience with the christmas choir, orchestra and dance.