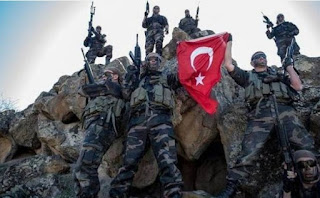 Cause the statements of a Turkish commando who was among the 12 of Imia in 1996…
The “success” was the whole of the Turkish army and not only the 12 commando who went through the Sea on 30 January 1996, said the retired Hakan Î¤ÏƒÎ±Î»Î¹ÏƒÎºÎ¬Î½ who was among the 12 that night.
In an interview with the news agency Î‘Î½Î±Ï„Î¿Î»Î¿Ï says that originally the Greeks soldiers don’t realise that they went up to the islet, but in the morning when some Greek soldiers realized they panicked, he says, and fled in the opposite direction. The Turkish commando declares ready to take it again “tasks” if the call home, saying that she wants to feel again the air of his homeland.
The Hakan Î¤ÏƒÎ±Î»Î¹ÏƒÎºÎ¬Î½ had started as a commando with the title of petty officer in the navy in 1986 and retired in 2009. He was among the 12 soldiers who made the company the Uk during the crisis with Greece. â€œThe company exaggerated but for a person who has education of a commando was not a very excessive business. We turned it into reality a matter on which we trained. With the business of Imia, the then government showed that the Turkish army will not give anyone the Turkish territories,â€ he said.
The Hakan Î¤ÏƒÎ±Î»Î¹ÏƒÎºÎ¬Î½ said that the order for concentration was given on the evening of 29 January 1996. We went out of our house and we went in our unit. We made our preparations. The night of the 30th of January we went to Them. The weather conditions were not good, that’s why we struggled a little bit. We didn’t stay long there. We went in the evening on the island, and by the morning we took there place. Until we get to the island and then not realised. In the morning we realised the Greek soldiers who were close to the islet of Imia from the side of Turkey. As soon as they saw us they panicked and from where it escaped to the other side. After the diplomatic mobility we withdrew from the islandâ€.
The company was the result of the coordinated work of elements of the Turkish army, he says. â€œThis was not a success only of the 12 soldiers who went to the island, but of the will that showed the whole of the Turkish army and the administration. The result was in favour of Turkey without being thrown or a bullet in the islet of Imia. The impact was very important. After the operation the Uk has changed the chief of the hellenic national DEFENCE general staff of Greece, and then and the government. The realization of this business from Turkey despite the EU and the US was very important,â€ he said.
In their minds at that moment all they had was to succeed the business. â€œFor years we had trained for this. The state that strives for us. Do the design thinking that you won’t come back. If at that moment you accidentally dropped a bullet and start a battle you may not return it. For all we were ready. We thought we’d even it up, and put the flippers on our feet and to get back to swimming,â€ he said.
The Hakan Î¤ÏƒÎ±Î»Î¹ÏƒÎºÎ¬Î½ said he is ready to take on any task assigned to it. â€œIf they call us we go without thinking. May be the Sea, may be elsewhere, I want to go again. To feel again that the air, for the country, for the motherland, to do something. We are always ready. We offer training in our groups with the ÎµÏ€Î¿Î½Î¿Î¼Î±ÏƒÎ¯Î± â€˜Big Moment’. We offer training for how to live the life in nature. We maintain the form of us doing the work we know until the day you need us. I wish I didn’t need us,â€ he said.Source