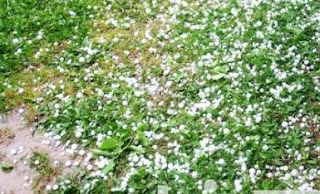 Incalculable is the damage left behind by the severe hail storms that hit yesterday afternoon areas of the municipality of Ilida, in…
regional section of Pineias, leading the producers to despair.
In a little time the farmers lost everything, their crops are delivered to the physical phenomenon without themselves being able to do anything. Crops watermelon, beans, vegetables, raisins, grapes, and sank into the waters and the mud, after being beaten senseless.
For half an hour
The hail fell locally, but it was more than enough to scatter destruction. It was a little before 4 yesterday afternoon when it started to hail, accompanied by strong winds, and the course followed was from the dam area of Pinios river and moved like a bow, struck the areas of Daphne and Î”Î±Ï†Î½Î¹ÏŽÏ„Î¹ÏƒÏƒÎ±Ï‚, a portion of the Î§Î±Î²Î±ÏÎ¯Î¿Ï… and subsequently moved to Kryoneri and Dove.
The hail lasted about a half an hour and everything fell apart in its path. The size was great, and in many cases the paved properly and the image reminded him of snowfall. The crops, especially the early watermelon, have suffered irreparable destruction. The plants â€˜were beaten with fury, and then they sank in the mud. That didn’t seem damaged last, it will be destroyed in the next few days.
Powerful blow
The farmer Panagiotis Liakopoulos from the Î”Î±Ï†Î½Î¹ÏŽÏ„Î¹ÏƒÏƒÎ± has suffered incalculable destruction and is no longer in despair, after a hailstorm struck the 47 acres of crops which has in the region between the Daphne and the Î”Î±Ï†Î½Î¹ÏŽÏ„Î¹ÏƒÏƒÎ±.
Today it was ready to cut beans, however will not even attempt to get into the field after all razed to the ground, while the seven acres of early watermelon, which had suffered irreparable damage, and the crops late-ripening watermelon as affected plants.
“The hail started falling around 3:50 in the afternoon and by 4:30 he was shooting nonstop to a large size. Came from north to south, with air and in a 500-metre radius left nothing standing. Leveled everything, beans, watermelons, raisins, peppers, vines, all of it. I was ready to pick beans and now it’s all gone. We happen to immeasurable disaster, where to go our eyes are all damaged and we don’t know what we’re gonna do, someone has to come to see to be given at least compensation,” said mr Liakopoulos.
Now the victims are demanding the immediate activation of the ELGA, in order to be sent to agronomists for estimates, so as to be compensated quickly in order to survive…
Smaller losses have occurred in the region of Amaliada and it is fortunate that the hail there was of short duration.
Great destruction in the watermelon of Î’Î¿Ï…Ï€ÏÎ±ÏƒÎ¯Î±Ï‚
Large damage to crops caused by the yesterday’s hail was accompanied by strong rainfall in the eastern Î’Î¿Ï…Ï€ÏÎ±ÏƒÎ¯Î±.
Shortly after the 15.50 the heavens opened. Powerful hail the size of a walnut fell for ten minutes in the area surrounded between the towns and villages of Varda, New york. ÎœÎ±Î½Î¿Î»Î¬Î´Î±, Island, Naples and ÎšÎ±Ï€ÎµÎ»Î­Ï„Î¿. When the strong hail stopped, started strong rainfall. The weather unfortunately caused significant damage to agricultural crops. The hail beat in particular, the crops of watermelon and melon, which are in the period of harvest, while large disasters caused in vineyards and olive trees. In the area ÎšÎ¿Ï…Î³Î­Î¹ÎºÎ± the hail lasted a little more than ten minutes and the hail, as shown in the photo, it was really the size of a walnut. “Unfortunately, I have to have done great damage to crops watermelon,” said the farmer Spyros good lawyer who he took pictures of the hail that fell on ÎšÎ¿Ï…Î³Î­Î¹ÎºÎ±.
“The ÎšÎ¿Ï…ÏÏ„Î­ÏƒÎ¹ didn’t hail, but a little to the north dropped a lot of hail and caused damage to watermelons,” said the farmer Dionysis Stathopoulos, the cultivation of which was destroyed by hail.
Recall that the same area was hit by powerful hail storms, and on May 3, and had destroyed several acres of watermelon. The farmers, through their correspondents, addressed to the ELGA asking for estimates and allowances. Until last Friday, the ELGA did not give signs of life.
Source