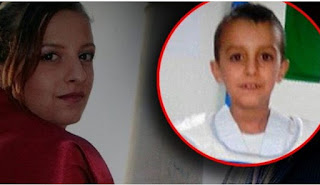 To 30 years in prison sentenced the evil mother who strangled 8-year-old son of…
and left his lifeless body in a ravine when he caught her red-handed with his grandfather…
Veronica Panarello, who strangled her son Loris Stival with electric cables, had tried to misdirect the authorities and pretended that her son was kidnapped to cover the horrible murder in November 2014.
The 28-year-old had told the Italian authorities in Santa Croce, in Sicily, he had been at the school on the fateful day and was gone by the time to pick him up in the afternoon. The Italian officers had begun to suspect the mother of the minor, as well as the images from the cameras of the closed circuit security, as the judge said Andrea Reale, confirmed the story.
The boy’s body was finally found by a hunter and brought severe wound in the head.
The 28-year-old mother was convicted of murdering the minor son, with the prosecutors to characterize self-centered and manipulative liar. When the Panarello eventually confessed to the crime, he accused the father of her husband, Andrea Stival.
He, as he told the court, he helped plan and execute the murder because the Loris had work to do. He of course denied the allegation and is threatening to sue the bride for defamation of character.