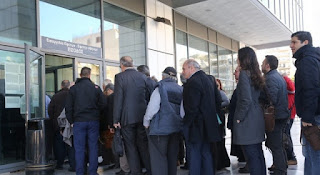 Inside a packed court room opened today, and with the barrier, the curtain of Ï€Î¿Î»ÏÎºÏÎ¿Ï„Î·Ï‚ case of “black funds” of Siemens…
Eleven years after the initiation of the investigation by the Greek justice system for the case of the contract Siemens -OTE known as the “8002” called in to answer a total of 64 accused who is facing serious charges that in some cases draw even life sentences.
However, the fiasco of last summer, with the non-translation of the referral order which led to the postponement of the trial was not such as everything seems able to be better coordinated . Thus, the process is again blocked, as well as the court room, which was set to host the trial, proved to be small with the result that looking for new.
At the same time one of the judges on the seat of said impediment and now needs to be replaced. The reason for this , in fact, led to the discontinuation of the trial for March 6, at the auditorium of the court of Appeal, with the president declares failure of establishing the court.
Twenty years after the signing of the convention, the Greek justice is to decide if there were bribes of millions and by who.
Present in the court gave the majority of the accused, including the erstwhile “general” of PASOK, Theod. Î¤ÏƒÎ¿Ï…ÎºÎ¬Ï„Î¿Ï‚, the former chief executive of OTE, Elias George, the operators Jn. Lecce and Vas. Î¤Ï…ÏÎ¿Î³Î±Î»Î¬Ï‚, but also the first witnesses to indictment, the journalist Tasos Î¤Î­Î»Î¿Î³Î»Î¿Ï… and the convicted former deputy director of Armaments Antonis Candace.
On the contrary, absent is the former strongman of Siemens Hellas, Michalis Î§ÏÎ¹ÏƒÏ„Î¿Ï†Î¿ÏÎ¬ÎºÎ¿Ï‚, who is represented by defense counsel, Christos ÎšÎ±ÏÎ±Î²Î­Î»Î±Ï‚, who remains a fugitive, but the bank official Fanis Î›Ï…Î³Î¹Î½ÏŒÏ‚ (represented) while there have been defendants who have requested from the court the ex-officio appointment of a counsel.
A civil party in case file the Greek government for the restoration of the moral damage suffered for an amount of 5 million. eur, OTE , a citizen member of CAA, but the establishment of Association of an Association of Persons Citizens, which is represented by the Life Konstantopoulou.
“Some citizens who want justice to be done,” said mrs Konstantopoulou which after he complained about the conditions of a trial denounced while “a complete lack of goodwill of the public and of justice to adjudicate the case.
“There is a collusion not to trial while there are matters of limitation,” she said.
Dimitri From who present as counsel for defendant in the case, observed: “it can’t be a national prosecutor, mrs. Konstantopoulou to be heard, a member of the audience comments: “Î¤ÏƒÎ¿Î²ÏŒÎ»Î± give it all you got”.