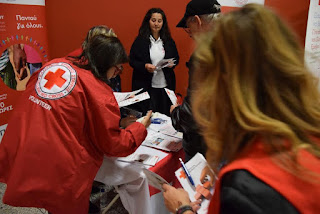 Some consider them heroes…
Themselves, they believe that they’re just doing their duty to our fellow man. Eleven thousand people, across the country, with a high level of education, self-denial and sense of duty is present where there is a need. It is the volunteers of the Hellenic Red Cross.
On words, offer, humanism, volunteering, in these people’s eyes brightened, and their voice is getting stronger as they narrate their personal experiences. “It was Christmas in Patras, and the Hellenic Red Cross was gathering toys and food for needy families in the Arcadia. Remember, that when we got out of the car and we started to make the bags to the split in the houses, we saw some kids started running, shouting: mom, mom came Santa Claus.
It’s one of the moments that I will never forget”, tells bill. He is doing his phd in the school of Chemical Engineering at the Technical university of Athens and works as a researcher. “For ten years I belong to the Body of Samaritans. When you offer to others, you can make the world a little better than you found him”, he says and his eyes shine.
“Despite my age, the offer to our fellow man is something that relaxes and fills,” says ms. Rita. “Before sixteen years I joined the ranks of the largest humanitarian organisation, the Hellenic Red Cross. After I completed my education, I swore as a volunteer for Social Welfare, and provided my services in the program “Help at home” hanging out on lonely, elderly people. As much as I can, I want to help your fellow man, and to him comforting. The same principles, I gave it to my daughter, who is a volunteer. I’m sure that the same path will follow and my granddaughter. The satisfaction and the joy that you get when you offer is huge. Gives meaning to your life.”
Iliana, has twenty years of volunteering as a nurse. “My grandmother was a nurse of the Greek Red Cross and so as a small child I grew up with the principles of the movement. For me now,” she notes, “the Red Cross is the second myself. It is very important to be close to the people who are suffering. You can numb the pain and to relieve their souls”.
John, has gone several times in Lesvos as a Samaritan – Medic. “Everything you’ve been trained to do, and everything you’ve learned about the principles and work of the Î•ÏÏ…ÏƒÏ„Î¿ÏƒÏ„Î±Ï…ÏÎ¹ÎºÎ¿Ï movement, you have the chance to do it, helping those people who arrive in our country”. He smiles when he remembers one incident that is etched indelibly in his memory. “We were in the camp of the ÎšÎ±ÏÎ¬Ï„ÎµÏ€Îµ. In those days, the influx of people arriving with boats on the coast of the island was very great. I was tired, and at some point we must have fallen asleep where I sat. One of the people who were accommodated in the camp saw me and went and bought with his own money a chocolate and tea. Came to me and offered to Ï„Î¿Î½Ï‰Î¸ÏŽ. The will of this man to support me, which for him, was very moving”.
Tasos is working a lot of hours. Finds but it is always time to offer his services as a volunteer Samaritan. “We can always find a little time to offer you,” he says. “Initially, I went to the Samaritans because they have a very high level of training in first aid”.
A little later, the words of Tassos turned out to be in practice. Within the area, which hosts the three-day event (3-5 December) of the Greek Red Cross for the international Day of Volunteering, there was an accident. The group of Samaritans mobilized immediately and provided first aid. The injured man was taken to hospital by ambulance or EMS, accompanied by two Samaritans, proving once again the concept of volunteerism and offer. 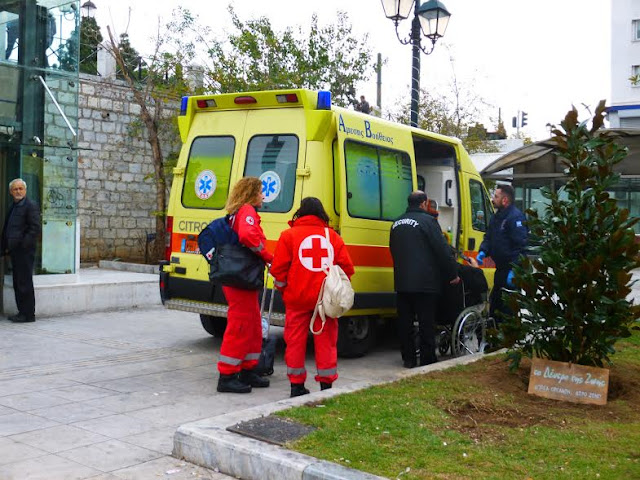