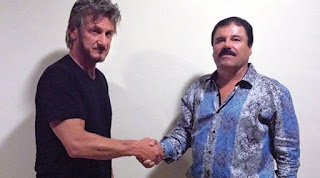 The American actor Sean Penn had met in secret…
with the Mexican drug kingpin Joaquin “El Chapo” Guzman, before the last one arrested in the city of Los Mochis on Friday, and had an interview published in the issue of Rolling Stone magazine that was released last Saturday.
The interview was published one day after the bloody operation to arrest the boss of the drug cartel Sinaloa from the mexican armed forces, and six months after the spectacular escape from the maximum security prison of the Altiplano, where she was transferred yesterday re.
In the article published in the magazine, Sean Penn points out that the Guzman became interested in the possibility to shot a movie about his life when I was inundated with requests from production companies of the united states after his arrest in 2014.
This item seems to confirm the statements of the attorney general of Mexico Î‘ÏÎµÎ»Î¯ Gomez said the other day that the desire of El Chapo for the big screen contributed to the arrest. “Another important element that helped us to track him down was that we discovered the intention of Guzman to shoot an autobiographical film about him. He came in contact with actors and producers…” had made the Gomez.
Sean Penn also revealed that he went in October of 2015 in a forest in Mexico where he had a meeting with a duration of 7 hours with the baron of the drug, which was followed by interviews by phone and recorded statements.
Also the American actress stresses that she took “the first interview that El Chapo never bestowed out of an interview room”. He described that the famous criminal was warmly embraced when they met in the clearing of the forest.
Rolling Stone published a photo which depicted the actor to give a handshake to Guzman on 2 October.
During the meeting, Guzman agreed to grant an interview later, however, the realization of the presence of the two proved impossible, and the baron answered video questions of Sean Penn, in the absence of the actor.
The taped material, which is posted on the website of the magazine, the Guzman clean-shaven and wearing a blue shirt appears to be talking in a place that looks like a garden, while in the background sounds a cock to speak.
“The fact that drugs are destroying (the man), it’s a reality,” says Guzman in Spanish in a video duration of two minutes, which half is Ï…Ï€Î¿Ï„Î¹Ï„Î»Î¹ÏƒÎ¼Î­Î½Î¿ in English.
“Unfortunately, as I have already said, where I grew up, there was no other way to survive, and there is still no” notes.
The Guzman answers also to the question of whether a personal responsibility in the spread of drugs at the international level, and argues that such accusations are “false”.
“The day I won’t exist anymore, that in no case will be eliminated,” he stresses.
In the same article the baron of the drug admits to the range of criminal activities.
“I sell more heroin, methamphetamines, cocaine, and marijuana as long as no one in the world,” he assures.
“I have a fleet of submarines, planes, trucks and ships” describes the El Chapo during the interview.
Asked about whether he knows if the mexican authorities want him dead than a prisoner, he answered:
“No, I think that if they find me they will arrest me. Definitely”.
In the interview, which took place the Mexican actress Kate Del Castillo, which has performed the “queen” of a street gang that deals in drugs in a well-known tv series, the Guzman recounted in the Pen that he had sent engineers to train in Germany for three months, in order to avoid any problems in the excavation of the underground tunnel that reached the cell, because the water table was at shallow depth.
The Guzman escaped through the tunnel in July 2015.
A source in the government of Mexico stated to the French Agency that the mexican security services knew that Penn met with Guzman in October of 2015 and added that this meeting was one of the elements of the investigation that allowed him to capture the most wanted drug smuggler in the world.
According to the same sources, the mexican authorities were informed about the meeting between Penn, the ÎœÎµÎ¾Î¹ÎºÎ±Î½Î¯Î´Î±Ï‚ actor and Guzman in October and watched the movements of the Pen, which helped them to locate a ranch where the baron of the drug resided, pointed to two government sources, as imparted the news agency Reuters.
Another source from the mexican government indicated that the authorities are considering the question Sean Penn and Del Castillo, where appropriate, category of money laundering. The same source gave no further clarification.
Source