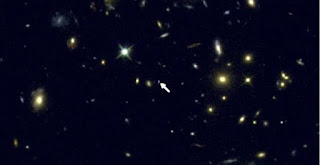 Astronomers in the US made the most distant detection of oxygen in the universe, which has been achieved to date. Traced quantities of…
oxygen in a distant galaxy at a distance of about 12 billion light-years from Earth.
The researchers, led by professor of astronomy Alice Î£Î¬Ï€Î»ÎµÏŠ of the University of California-Los Angeles (UCLA), who made the relevant publication in the journal astrophysics “Astrophysical Journal Letters”, used the large Keck telescope on mount ÎœÎ±Î¿Ï…Î½Î±ÎºÎ­Î± of Hawaii to make the first accurate measurement of oxygen in a galaxy far, far away.
Oxygen, the third most abundant chemical element in the universe, is created in the interior of stars and, when they die, and ÎµÎºÏÎ®Î³Ï…Î½Ï„Î±Î¹ (super-nova), is released in the interstellar gas.
The galaxy COSMOS-1908 where the detection of oxygen, it contains about a billion stars, far less than the 100 billion of our own galaxy. In addition, this remote galaxy contains only about 20% of the oxygen that has been observed in the Sun.
Source