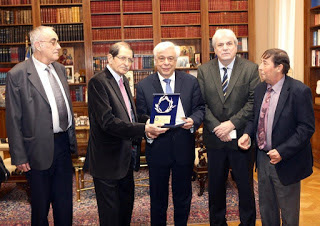 Under the auspices of the President of the Republic, mr Prokopis Pavlopoulos will… lay the initiatives of the Panhellenic Association of Kidney patients aimed at spreading the idea of donating body tissues and organs.
The assurance this provided the President of the Republic satisfied the request of the Association, which was formulated by the nomination by the board.P. as an honorary member of the continuous and unfailing support of the idea of the donation of body tissues and organs in the meeting that happened today 15/02/2016 at the Presidential Palace.
Present at the meeting was the President of the UOS Andreas ÎšÎ±ÏÎ±Î¼Ï€Î¯Î½Î·Ï‚, while the Panhellenic Association of Kidney patients attended by the President George Kastrinakis, Vice president Xenophon Î›ÏÏÎ¿Ï‚ and the Yen. Secretary Gregory Î›ÎµÎ¿Î½Ï„ÏŒÏ€Î¿Ï…Î»Î¿Ï‚.
A debate ensued in a cordial atmosphere, where the representatives of the Association mentioned in the programme of actions planned to be carried out on a national scale, and exchanged views with the President on the initiatives that will be undertaken for this purpose.