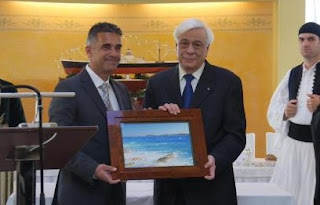 With all solemnity as befits the institution of the President of the Republic was declared an honorary citizen of Syros â€“ Ermoupolis mr Decent Pavlopoulos with a unanimous decision…
the members of the municipal council in the presence of representatives of the Authorities of the place and the Region of South Aegean.
The President of the Republic was welcomed by the Mayor of Syros â€“ Ermoupoli, George Carpenter in the hall well-known hotel in Ermoupolis as well as his Eminence Metropolitan of Syros mm Dorotheos B, the Catholic Bishop of Syros, Bse. e. Peter Stephen, and the government member of parliament, Antonis Syrigos, the Governor of South Aegean, George Î§Î±Ï„Î¶Î·Î¼Î¬ÏÎºÎ¿Ï‚ and representatives of the Administrations of the Greek Army, the Security forces and many elected officials of the two degrees of self-Government.
The event, which was attended by the state Secretary in the prime Minister’s office, Terrence Quick, opened with the greeting of the president of the municipal council, Maria Kazantzaki, which read out the content of the unanimous resolution welcoming the President of the Republic on the island of Syros, on the occasion of the glorious celebration of the patron saint of the island, Agios Nikolaos and was followed by a speech of the mayor, in which were announced the reasons for the Î±Î½Î±ÎºÎ®ÏÏ…Î¾Î®Ï‚ of an honorary citizen of Syros â€“ Ermoupolis.
Then the greeting of mr Prokopis Pavlopoulos, who expressed his gratitude for the honor to his face, which he accepted as he stated explicitly, only as an honor to the institution of the Republic, he was awarded the honorary plaque as well as a painting of the artist, Michael ÎœÎ±ÎºÏÎ¿Ï…Î»Î¬ÎºÎ·.

It is worth noting, that the President of the Republic has been comprehensive in his word regarding the history and current state of Syros, but also of the country’s total, pledging at the same time trying to rise to the occasion for the good of Greece, in a particularly difficult and demanding international context. 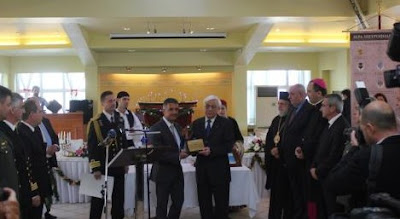 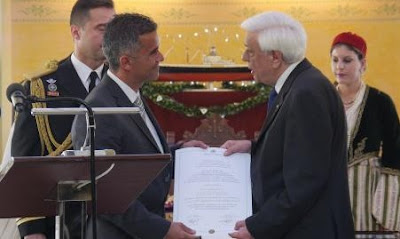