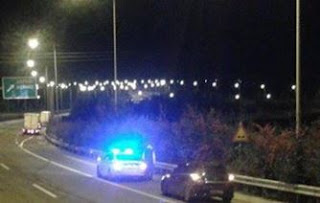 â€œHolyâ€ seem to have been a priest and a pastor’s wife who were riding in I.X. car brand Nissan Sunny, which fell on burning rubber Ï€ÏÎ¿Ï€Î¿ÏÎµÏ…ÏŒÎ¼ÎµÎ½Î·Ï‚ truck, which had burst and was on fire on the national road Volos-Athens, just before the junction of Aerina.
In accordance with information of the magnesianews.en a truck, which was moving in power in Athens at the height of the node Î‘ÏÎ¼ÎµÎ½Î¯Î¿Ï… at 10.40 a.m. about Thursday night, lost a tire, which caught fire and fell into a cars that followed.
The truck â€œfoldedâ€ and went into the right lane without leaving the road.
Lucky for them the driver of a truck that followed and the occupants of the two cars (Opel black, silver Mercedes) and a small bus were not injured, however their vehicles have suffered serious material damage.
The point of the accident was called in the highway Patrol closed the two right lanes until the movement. To the point I called an ambulance the AMBULANCE as it was found that there was no injury, but the involvement of the priest, gives another dimension to the phrase that the driver â€œwas holyâ€.