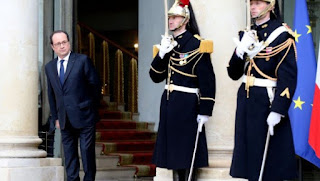 The president of France Francois Hollande…
today visited the suburb of Paris where a young man allegedly fell victim to police violence, in a case that was the reason for three consecutive nights of protests and events.
Hollande went to the hospital ÎŸÎ»Î½Î­-your-Bois and spent half an hour with the victim, 22-year-old Theo and his family. The young man was seriously injured during the arrest, last Thursday and had to undergo surgery as well as supports, a cop sodomized with a nightstick.
The French president sang the praises of Theo, a young “well-known for its exemplary behavior”, who responded “with dignity and responsibility,” in what happened to him.
The same Theo invited the young people of the neighborhood to “don’t make war” but “to remain united” and stressed that he has confidence in justice.
The officer who allegedly sodomized the young man accused of rape while three of his colleagues are accused of aggravated assault by a public.
“Justice (…) it guarantees the freedoms and people need to understand that the judge protects them,” he had declared earlier the French president, stressing that the justice has the role of protector for their citizens even when the case involved members of law enforcement.