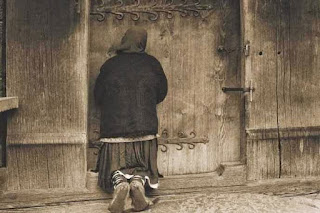 We are in Moscow, in the 1980s…
At twelve midnight, knocked on the door of the Church. It was a little old lady. And he asked for a priest, go to communion with a sick.
The priest was prepared, and came out immediately with her. Approaching in a poor house type shed. The old lady opens the door and sucks the priest in a room.
And suddenly the priest is there alone with only the sick.
Sick of shows with gestures to the door and howl.
– Get out of here! Who called it? I’m an atheist. And an atheist will die.
The priest lost it.
– But I didn’t come on my own! With called the old lady!
– What old lady? I don’t know any old lady!
The priest, as he stands across from him, he sees above the head of the sick, a picture of the woman who called.
He says, while she shows him the portrait.
– To this!
– What’s this, you Know, what do you say, priest? This is my mother. She’s been dead for years now!
For a moment they froze and the two of them. They felt awe. The sick began to cry. And after he wept, he asked to be confessed. And then, ÎµÎºÎ¿Î¹Î½ÏŽÎ½Î·ÏƒÎµ.
His mother had taken care of the sky, to show him the way of salvation.
Dimitrios ÎÏ„Î¿ÏÎ½Ï„ÎºÎ¿,
From the book (At the crossroads), Moscow, 1994