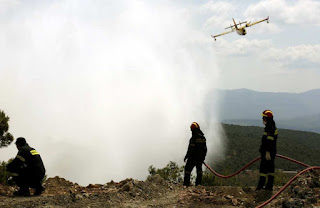 The violent storm of the Third (28.06.2016) it was a gift…
for the firemen for the last four days they gave a tough fight to put out the fire that burned almost 5,000 acres of pine forest in the Î”ÎµÏÎ²ÎµÎ½Î¿Ï‡ÏŽÏÎ¹Î±.
By the evening of Tuesday, the fire was brought under partial control as announced by the fire service, with the possible downpour is the best antidote to the fiery whirlwind, which started late last Saturday night.
The point, however, remain powerful forces of fire, as there is the fear of revival. On the spot are 100 firefighters, 50 vehicles and 100 soldiers, 23 vehicles.