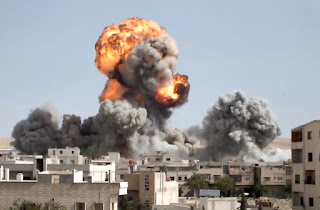 Fighters of the US coalition…
hit positions of the syrian Army in Deir Ez-Zor with Russia to respond and to send fighters Su-30 and Su-34 while he took the Fleet of the Caspian sea, a total of 50 ships and asked me to close the airports of Erbil and Sulaimaniyah in Iraq for 48 hours (as the deadline for Iraq to Turkey), as it will follow a storm of cruise missiles!
At the same time, Turkey not only does not withdraw its troops from Iraq, but was discovered, and the Turkish air force base in Dyhok with the President of the Commission of the Iraqi Parliament’s defense and security indicate that she may soon seek the military assistance of Russia due to the Turkish invasion!
Snap this morning, the Russian general staff gave the order to fifty warships in the Caspian sea, to enter into full military preparedness, with the application of “real exercises”, report Russian MEDIA.
Among these ships are the corvettes with Cruise missiles such as “Tatarstan”, “Dagestan” and “Astrakhan” as well as the Ï€Ï…ÏÎ±Ï…Î»Î¬ÎºÎ±Ï„Î¿Î¹ “Sviyazhsk” “Uglich”, “Big Ustyug”, “Volgodonsk”, “Makhachkala”, reads the statement of the Russian fleet.
The Russian officers have received clear orders to carry out exercises, with a view to the preparation of units of surface for the battle, such as exercises with live ammunition, exercises, air defense, etc .
At the same time transferred to special forces in Deir ez-Zor and the Russian fighters Î²Î¿Î¼Î²ÏÎ´Î¯Î¶Î¿Ï…Î½ ruthlessly trying to stem the advance of the islamists, and to save the situation.
Four fighters of the US coalition hit with 9 missiles at positions of the syrian Army in Deir Ezzor, killing 4 soldiers, 13 wounded, and destroying two tanks.
Specifically, in accordance with information fighters hit a camp belonging to the 137th Brigade of artillery of the syrian Army in the village of â€˜Ayyash, which protected it from the ISIS, which has besieged Deir Ezzor.
Syria and Russia are talking about a targeted attack which was coordinated with the islamists as it was followed by an attack on the basis of Ayash.
The news posted and the BBC, which after a while disappear!
At the same time, Russia hit positions of the islamic and media in Lebanon this morning.
Finally, it was discovered the Turkish air force base in Duhok, in Northern Iraq, intended to use the Turkish air force hit positions of the Kurdish PKK.
The air base is called Bamerne while in the pictures you see below are 14 Turkish tanks. The coordinates of the base are 37Â°05’52″N, 43Â°15’58″E.
The head of the Committee of the Iraqi Parliament’s defense and security, Hakim al-Zamili,in an interview stressed that Baghdad may ask the help of Moscow after the Turkish invasion.
“We can soon ask for the help of Russia for direct military intervention in Iraq as a response to the Turkish invasion and violation of iraqi sovereignty,” said al-Zamili
Earlier, the Hakim al-Zamili threatened Turkey with a military operation if you don’t leave the troops immediately from Iraq.
Source