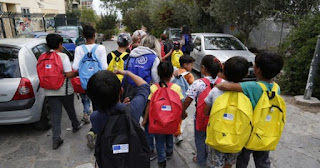 Continuing the controversy…
in Larissa, on the occasion of the accession of the Ï€ÏÎ¿ÏƒÏ†Ï…Î³ÏŒÏ€Î¿Ï…Î»Ï‰Î½ school of Larissa, and in particular of the 26th Elementary school, where according to the personal statements of the president of the Association of Parents of Stephen Î§Î±Ï‡Î¬Î¼Î·, the association of the school doesn’t want to study the children of the refugees.
First, came the complaint of the principal of the school Helen Î£Ï„Î±Î³Î¹Î¬Î½Î½Î·, which stated, among other things, that the president of the association, calls on the students to see racist video on the page of the association on Facebook, and that “does not comply with any of the legal procedures operation of the Parents’ Association, issuing public notices, without a meeting of the BOARD of directors”.
“I was not called to express an opinion on the communications of the association”
The member of the board.P. the Parents ‘ Association Joan Î“ÎºÎ¿Î½Î­Î»Î± and mother of two children, in exclusive statements to the ana-MPA, said the following: “failure to comply with the operating procedures of the association, about how decision-making”. “As an elected member of the board.P. the Association of Parents and guardians of the 26th primary school of Larissa, I want to assure you that I have never been invited to a meeting of the board of directors, but only to set the organs in the body, as well as in the last meeting on Sunday, January 22,” said Joan Î“ÎºÎ¿Î½Î­Î»Î±.
In the question that was raised, if he had the ability to express an opinion on the content of the notices published in the Press and which cause hatred against the refugees, the member of the board.P. he argued that “not only do I agree with the content of the communications that are sent to the Press, but I say categorically that for all these announcements, I have never been invited to express an opinion”.
Finally, the Joan Î“ÎºÎ¿Î½Î­Î»Î± expressed her personal opinion on how you perceive the integration of refugees in the school, saying that these children “have every right to education”. “My personal opinion is that these children who were forced because of war to leave their homeland, they have every right to education according to law”, she said.