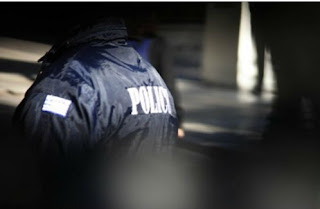 From the Department of Internal Affairs of Northern Greece, formed a brief Î±Ï…Ï„ÏŒÏ†Ï‰ÏÎ·Ï‚ process in weight 53Ï‡ÏÎ¿Î½Î¿Ï… Sergeant, who serves in the Service of the Prefecture of Thessaloniki, for the offenses of forgery, embezzlement in the Service, theft of power and water as well as infringements of the legislation of the customs code of the antiquities and weapons.
In particular, yesterday (18-10-2016) the 53-year-old officer during inspection by officers of the Department of Internal Affairs of Northern Greece, it was captured to drive a car ownership, which bore fake number plates and devoid of insurance policy.
From the evolution of the investigation it was found that the original registration licence and the number plates had been delivered seven years ago in D.The.Y.
In research carried out in the presence of a judicial officer, in the house of, in the above vehicle and in the warehouse ownership found, among other things, and seized:
(4) pistols, knife, pepper spray,
(2) tear gas,
(486) cartridges of different calibers,
(9) boxes of cigarettes that did not bear the required by law indicative security tape,
machine scanning/detection metal detection devices measurement and detection of electrical current,
traffic sign which was reported stolen from owner’s car, in Service of Thessaloniki and (2) traffic signs-a-car, which did not embossed state seal as well as
Identity card of a person, for which he had declared the loss, in Service of Thessaloniki.
Also in a parallel investigation carried out with the assistance of officials of the D.E.D.D.The.E. and R.Y.A.Th. in the house of 53Ï‡ÏÎ¿Î½Î¿Ï… found the theft of power and water, as well as have carried out illegal interventions in the meters for water and electricity supply.
The 53-year-old with a brief that was formed at the expense of the led to the competent Prosecutor.
By Decision of the Hellenic Police, the Sergeant was immediately suspended, while at the same time ordered the conduct of Formal Administrative Investigation.