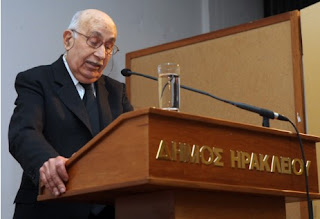 He left a great patriot, the man who knew too much, and I never spoke to you…not to hurt the country… general John Î‘Î»ÎµÎ¾Î¬ÎºÎ·Ï‚Î±Ï€ÎµÎ²Î¯Ï‰ÏƒÎµ this morning at the age of 77 years, causing sadness and pain for the families, but to those who knew him.
The general Alexakis with a leading role in the anti-dictatorship fights since he was an associate of Alexander Panagoulis, while post-dictatorship he became friends with Andreas Papandreou and served two times as director of Security of the then Central Intelligence Agency.
The same if and was slandered many times, especially in the ‘ 80s he never spoke, never said anything that could be done national damage…

The general Alexakis was married and has a son, Elijah, while his funeral is scheduled for next Monday morning as expected from abroad, many relatives and friends
Who is
The deceased general was born in 1938 in Heraklion , offspring of an old and important military family of the Î Î¿Ï„Î¬Î¼Î¿Ï…Ï‚ of Lasithi,the most distinguished member of which was general John P. Alexakis, the first Greek officer who entered in Thessaloniki in 1912. He graduated from the Military Academy (SSE) in 1959 as a second lieutenant of Infantry. Later, she completed her studies at several military Academies in greece and abroad.

The period of the junta of the colonels, the Alexakis had substantial involvement in the anti-dictatorship fights and has been an important partner of the group of Alexandros Panagoulis. Yes, his wife Nena, a clerk in the administrative department of the Cyprus embassy in Athens, was the person that was delivering weapons and explosives to the representatives of the Neighborhood, which was hidden in the diplomatic pouch coming from Cyprus.With these explosives, the Sunday carried out the attempted assassination of dictator George Papadopoulos.
In the year 1973, took part and had an important role in the movement of the Navy, together with the Spiro ÎœÎ¿Ï…ÏƒÏ„Î±ÎºÎ»Î®, who was tortured inhumanly at the EBA-ESA.
In July 1974, immediately after the restoration of the republic, Konstantinos Karamanlis was appointed leader of the Central Intelligence Agency (BPH) the loyalist general Constantine Î¦Î­Ï„ÏƒÎ·. The Î¦Î­Ï„ÏƒÎ·Ï‚ immediately appointed then major Alexakis director of the Department of Security INTELLIGENCE, and upon the advice of general Perides, with which the Alexakis co-existed in the resistance organization “Free the Greeks”, which was attended by Î±Î½Ï„Î¹Ï‡Î¿Ï…Î½Ï„Î¹ÎºÎ¿Î¯ officers from across the political spectrum.
With a somewhat broad interpretation of official duties (security INTELLIGENCE), Alexakis has assumed responsibility for the tracking of right-wing “droplets” in the Armed Forces, and the department of attributed the credit for the discovery and suppression of Ï†Î¹Î»Î¿Ï‡Î¿Ï…Î½Ï„Î¹ÎºÎ¿Ï coup d’Ã©tat of pajama bottoms at the beginning of 1975. He also undertook the responsibility of handling the Files of the EES and has cooperated effectively with Michael Î–Î¿ÏÎ²ÎµÎ»Î¿, commissioner (military prosecutor) at the court martial the torturers of the EBA-EES as well as with John ÎÏ„ÎµÎ³Î¹Î¬Î½Î½Î· in the trial of Î±ÏÏ‡Î¹Ï€ÏÎ±Î¾Î¹ÎºÎ¿Ï€Î·Î¼Î±Ï„Î¹ÏŽÎ½.
In this first term in BPH, Alexakis has developed a close relationship with Andreas Papandreou and PASOK, but with the journal News, which from the beginning of 1976 were published classified files of the EES, which caused the discomfort of right-wing Military officers. Finally, in April 1976, the minister of National Defence, Evangelos Averoff asked me to stop the posting of Alexakis in BPH and to return to the Army, but he met the firm resistance of the head of INTELLIGENCE general Î¦Î­Ï„ÏƒÎ·, who argued that the Alexakis is necessary. The Averoff insisted and finally managed to convince Karamanlis to replace both Alexakis and the general Î¦Î­Ï„ÏƒÎ·: new chief of INTELLIGENCE took over the general Kalamakis.
In October 1981, with the electoral victory of PASOK, the Alexakis who had in the meantime been promoted to lieutenant colonel, he returned to INTELLIGENCE as the director of the Department of Safety, and in 1984 took over and Address Intelligence. He continued to have a close relationship with Andreas Papandreou, whom he was visiting, even on holidays in Elounda and the Star of Vouliagmeni. In late February of 1983, seems to have been from the people who brought the information to the prime minister on the attempted coup by right-wing: followed by a training exercise of the Armed Forces and mass Î±Ï€Î¿ÏƒÏ„ÏÎ±Ï„ÎµÎ¯ÎµÏ‚ right-wing officers, mostly in the Army.
Remained in BPH as in 1986, so he went to Cyprus as the commander of ELDYK. He retired in 1991 as major general, and later was named honorary lieutenant-general.Source