He commented to dad that his children “ruined” an interview... 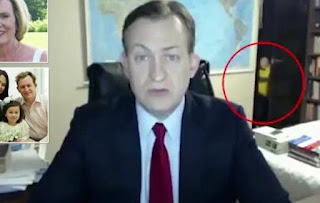 Professor Robert Kelly is one of the faces of the days or rather the kids of a and…
they managed to steal the “glory”! It is the teacher who, while giving an interview in a live broadcast on the BBC saw the kids entering in the room and make probably the most of “Ï€Î¿Î»Ï…Ï€Î±Î¹Î³Î¼Î­Î½Î· spoiler alert” of all time.
The professor gave an interview with his wife, Kim Jung-Ah, (yeah, the lady who came in like a whirlwind to pick you up from the kids) in the Wall Street Journal. Of course the interview could not be missing the cute kids.
“It’s a comedy of errors,” he explained himself. Yes, the professor mentioned that he’s the reason why he had not locked the door of the room, as he usually does in such cases.
As revealed, he began to write a letter of apology to the BBC, however, within 15 minutes, the people of the channel contacted him, asking for the permission of the family to view the controversial video. They at first refused, but in the end gave it to him.
The couple stressed that they do not fight the children about what happened while, as the professor said: “it was cute”.