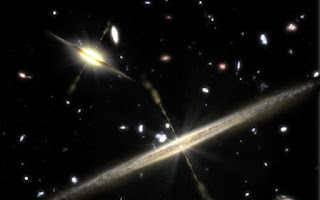 The way that theoretical physics could solve the energy problem of the planet, presented by the famous British physicist Stephen Hawking in Schedule 4 of the radio station of the BBC, known as Radio 4.
By the second speech in the context of the lectures Reith, which are held every year in honor of the founder of the BBC John Reith, the Hawking explained how “tiny” black holes could meet the needs of the whole of humanity into electrical energy.
However, he pointed out that, even if it is possible to implement such a scenario, you will have to overcome enough obstacles to have the desired effect.
According to him, a black hole the size of a mountain would emit radiation in the form of X-ray and c with a force of approximately 10 million Megawatts, electrifying the whole Earth.
This radiation is known as Hawking radiation, as was envisaged for the first time by the British natural. Its existence is due primarily to the nature of the vacuum, according to quantum physics, in which they can be formed pairs of virtual particles and Î±Î½Ï„Î¹ÏƒÏ‰Î¼Î±Ï„Î¹Î´Î¯Ï‰Î½, which in a de minimis time they annihilate each other.
However, if such a pair is in the “neighborhood” (i.e. the event horizon) of a black hole, then it is possible that a virtual particle to end up in the black hole, with the result that it can no longer be disintegrated by interacting with the “partner”. Therefore, the “orphan” virtual particle which is left will escape, forming the Hawking radiation.
At the same time, however, the scientist makes it clear that the only easy case would not be the utilization of a black hole for the production of electricity.
“Could not be installed in a factory, after it had eluded the floor, ending up in the center of the Earth. The only way to check would be to put it into orbit around our planet”, he noted.
He also added that, although scientists are looking for here and years of microscopic black holes in nature, to date their efforts have not brought result. “Unfortunately, because otherwise I probably would have gotten a Nobel prize,” he said jokingly.
Nevertheless, according to him, it would be possible to create such entities on the extra dimensions of Ï‡Ï‰ÏÏŒÏ‡ÏÎ¿Î½Î¿Ï….
A significant number of scientists believe that in addition to the four known dimensions, the three dimensions of space and the dimension of time, there are additional dimensions that, if not aware, are the explanation for unsolved up to today mysteries of physics.
“On the basis of some theories, the universe that we perceive is nothing but a Ï„ÎµÏ„ÏÎ±Î´Î¹Î¬ÏƒÏ„Î±Ï„Î· “surface” in a space-time of 10 or 11 dimensions”, he noted.
“The reason why we cannot see extra dimensions is that the light is not spread to them, something that unlike it happens with gravity. Which means that it would be much easier to create a microscopic black hole in extra dimensions”.
According to him, in fact, their existence is likely to be confirmed at the Large Hadron Collider (LHC) at CERN in Geneva. In the tunnel of the LHC, two particle beams moving in opposite direction, so as to collide with each other.
“Some of the collisions might create a microscopic black holes. Then, I emitted particles with specific characteristics, which will be easy to recognize,” he added. “So, maybe Î²ÏÎ±Î²ÎµÏ…Î¸ÏŽ Nobel prize,” he concluded.