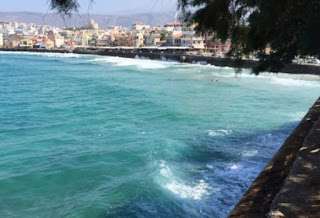 The life of a 60-year-old risked his life today while he was swimming at noon in the sea…
the area of Koum Kapi. The man was trying in vain to reach the shore but the intense ripple not only don’t help but draw him away from the beach.
The swimmers who saw the agony of the 60-year-old called in to help the port authority. At the point arrived, two coast guard of which the one dived into the sea to retrieve the bather, the forces of which had been exhausted in the meantime with the result that it is much more difficult effort of the coast guard to get him out to the coast because of the rippling.
There arrived a fishing ship and a ship of the Sailing club, which had been called earlier. The port tried to raise the bather in the fishing but the waves prevented any attempt. Eventually, they managed to board the ship of a sailing group that was carrying them to the shore.
To note that this incident may have had a happy ending, however today lost their lives two people to the beaches of Chania, which is something that should be a warning to bathers to be cautious and avoid swimming when the weather conditions are not ideal or when the waters are unknown.
Almost destined to be today the water bath for 7-year-old boy, which is a patient intubated in PAGNI.
Source