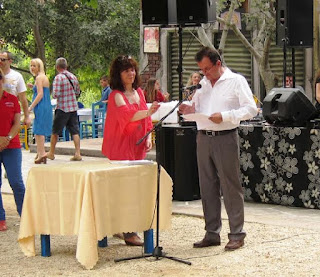 Compatriots and compatriots
Friends, and friends of the Continent and the Continental tradition….
convey their warmest patriotic greetings of the Board of the Panepirotic Confederation of Greece and I am particularly pleased that today’s our reunion.
We are experiencing the last years of an economic crisis to deal with them we must be united and together to overcome. We are here today not as spectators, but as the times require we are next to each other, we’re all in this together and we are engaged and we enjoy the pulse and rhythm of the original continental of traditional folk music and not only.
Such is the love of the times for delivery and like the privileged relationship with her so that it forms an integral part of our identity, a Î¬ÎºÎ¿Ï€Î¿Ï‚ umbilical cord with our origins and our ancestral root.
We, the immigrants from epirus and the bodies of Continental emigration at the forefront in the fight for the rescue, dissemination, conservation, conveying to the younger generation and the view of faraway lands and environments completely different from the physical and social space of survival. The race is continuous, perpetual, and fruitful.
Even today, when times are tough because of the prolonged, and endless economic crisis, the struggle for tradition and culture, not Ï…Ï€Î¿ÏƒÏ„Î­Î»Î»ÎµÏ„Î±Î¹ is upgraded and enhanced.
In such difficult times, the immigrants from Epirus maybe we’re the only ones who can meet up so massively in the common place of delivery, and broadcasting messages of general value and importance.
Today’s meeting of the continental societies of Eastern Macedonia and Thrace, and not only compose and indicate in particular the dance and movement, singing and the timbre of the natal place of our elements of our popular culture, at a time of a global society is the average expression of the local and our national consciousness, and the great contribution of the organised Continental emigration. It is a bar to the alienation and a resistance to questioning the validity of the greeks.
The Î Î±Î½Î·Ï€ÎµÎ¹ÏÏ‰Ï„Î¹ÎºÎ® is currently experiencing a high degree of the decline, and the multi-dimensional crisis of our country (moral, social, and economic) standing, but racing towards them, expanding and updating the actions in the social and cultural role with the certainty that together we will halt the slippery slope and you’ll pass through it soon enough in the development, and calls on the state through any small or large designs of development, the Continent of our hearts to receive his proportionate share.
And yet our request to the state extends to that can be the subject of the project and the functioning of expatriation, and we ask to be understood that we are actors of popular education produce and spread culture of volunteerism and dream for Greece, and we demand to consolidate the join us in any small or large projects of the Ministry of Culture.
We also call on the mainland, the mainland migration to staffing and to support local Clubs Epirus in terms of historical memory, solidarity and social cohesion decanting to the new generation the meaning of the Î—Ï€ÎµÎ¹ÏÏ‰Ï„Î¹ÏƒÎ¼Î¿Ï as a concept principles and values of life.
I took over the presidency of the Panepirotic in March 2015 after of the resignation of George Economou and I was elected again after elections last April.
The first priority of the finances of the Panepirotic that was not in good condition. We have come after a lot of effort in some relative balance.
Secondly our relations with organizations and primarily with organizations in the region and that’s the point, and the current of my presence at the meeting of clubs.Must be expressed in the region of the Î Î±Î½Î·Ï€ÎµÎ¹ÏÏ‰Ï„Î¹ÎºÎ® and this theme will see it in the General Constitutive Assembly in the spring of the year 2017.
And thirdly, our reunion with the organizations abroad.A first approach in September 2015 and we are aiming at a Global Î Î±Î½Î·Ï€ÎµÎ¹ÏÏ‰Ï„Î¹ÎºÏŒ Conference in the spring of 2018 in order to draw conclusions on the basis of new data and conditions that have been created in our country .
It’s not easy but we will try to chart our new course.
In closing I wish to Î±Î½Ï„Î±Î¼ÏŽÎ½Î¿Ï…Î¼Îµ with the good and have fun today.