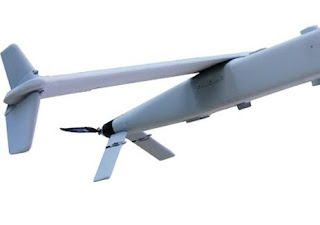 The Green Dragon, a compact, low-weight version of the “walking” weapon, Harop, which uses guidance electro-optical / infrared (EO/IR), in order to…
there is the human presence in the loop of the mission, presents the IAI (Israel Aerospace Industries) at the international aerospace exhibition Singapore Air Show 2016.
The Green Dragon and the Harop is designed for the detection, tracing and destruction of high value mobile and fixed targets. During the manufacturing of the Green Dragon is a regular, tolerable economic cost weapon that meets the demand for organic, sustained, aware of the tactical situation and direct engagement and destruction.
For this reason it is suitable for low-level ground units and special operations forces. Due to the use of an electric motor, the Green Dragon can operate silently for up to two hours, during which the user can collect visual information to surrounding areas at distances up to 40 kilometers.
Also, the Green Dragon can detect and lock targets and then command the pilot to perform maneuvering immersion against them and explode with a probable circular error (CEP) of less than one meter.
However, due to the existence of human presence in the loop of the mission the operator can cancel the attack at any time before the impact of the weapon on the target via the built-in tool “abandoned and erased circle”. In this way you avoid mistakes in targeting or unnecessary collateral damage.
With a weight of 15 pounds the Green Dragon uses for surveillance, targeting and terminal guidance of the construction IAI sensor electro-optical / infrared MicroPOP and the weight of the Ï€Ï…ÏÎ¿ÎºÎµÏ†Î±Î»Î®Ï‚ amounts to 3 pounds. The Green Dragon is transported and launched from a canister with a length of 1,7 meters that can be carried as a burden by a person or installed on a vehicle (group of 12 to 16 canisters).
After the firing of the weapon develops of the blades (wingspan of 1.7 meters), which would allow it to go around in circles above the area of interest and to perform the terminal maneuver immersion. The control of the gun is made from station handling sized tablet by means of regular, low power radio link. According to open sources, the Harop is currently in service in India (also attempts the Harpy) and Azerbaijan.