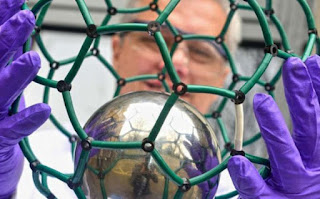 From the laboratory of the University of Oxford and the… Greek Dr Kyriakos Î Î¿ÏÏ†Ï…ÏÎ¬ÎºÎ· produced the most expensive material in the world. As long as you consider that each gram priced Â£ 100!
As stated in the newsit.gr, citing sources in the british Telegraph, the endohedral fullerenes, a “cage” of carbon atoms which contains nitrogen atoms, it is used for the creation of the world’s most accurate system for timekeeping in the world. For the production of a small and portable atomic clock that could enable the navigation system for driverless cars to operate with an accuracy of 1 mm.
Atomic clock is called the order of measurement time, which offers the largest available measurement accuracy. The atomic clocks used by national standards bodies as a primary standard for the determination of International atomic time and the clock synchronization at national and global level, the frequency control of television stations and the operation of GPS systems (Global Positioning System).
Behind the “endohedral fullerenes” is Dr Kyriakos Î Î¿ÏÏ†Ï…ÏÎ¬ÎºÎ·Ï‚ that deals with the production of the material since 2001. “Think of an atomic clock miniature that you could have on your mobile. This is the next revolution for mobile”, he noted. The fullerene, which is also known as the “Bucky-ball” due to the spherical shape, consisting of 60 carbon atoms. Recently sold the first 200mcg the material of 22,000 pounds. “This endohedral fullerene could works on chip and integrated into the mobile phone,” noted the director of Oxford Technology SEIS fund Lucius Cary.
“There will be many applications for this technology. The most obvious is for the control of autonomous vehicles. If two cars are coming towards each other on a country road, knowing that they are located with an interval of 2 minutes is not enough, while knowing their position at 1mm it is.”