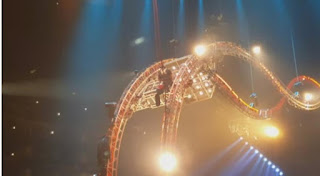 Hanging from the scaffolding at the scene found the Greek drummer, Tommy Lee, of MÃ¶tley CrÃ¼e, during a concert in Los Angeles, new Year’s eve…
He was the last and most ÎµÏ€ÎµÎ¹ÏƒÎ¿Î´Î¹Î±ÎºÏŒÏ‚ station on the tour of a rock band. The drummer Tommy Lee got stuck on a scaffold where he was hanged upside down.
Immediately asked for help from the members of the band, to put a hand, while he could not believe what happened to him Ï‡ÏÎ¿Î½Î¹Î¬ÏÎ± day.
As shown in the video, the rails that were set up did not work and the rest of the band members managed to extricate! He continued to play undeterred.