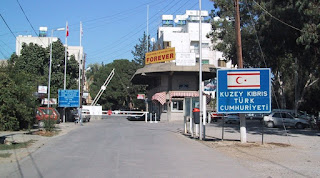 With three olive trees you will plant in three schools for primary and secondary education… visiting today, about 60 Greek cypriots teachers, accompanied by their Turkish cypriot colleagues passed today in the occupied part of Nicosia, carrying messages of peace, togetherness and cooperation.
This was the first visit after more than two years, and will follow corresponding Turkish Cypriots and teachers ‘ in Greek cypriot schools next February. The co-chair of the platform of Greek-cypriot and Turkish-cypriot teachers “United Cyprus” that was created in 2004, Maria ÎœÎ±Ï…ÏÎ±Î´Î¬ stressed that on the occasion of the new year they want to convey to their fellow teachers a message of peace and friendship. “We’re not politicians, we’re teachers. As teachers we want to move on and put our hand on a Cyprus single, free, without hatred, without fanaticism, united to all”.
The SECRETARY-general of the Turkish cypriot teachers KTOEOS, Vedat Tek, stated that the teachers in both communities and give a message to the rulers on both sides that the teachers, the teachers want peace. The visits concern, he explained, three schools, a primary school, a high school and a professional high school.
The SECRETARY-general of the Turkish cypriot teachers KTOS, Sener Î•Î»Ï„Î¶Î¯Î» spoke of a special event they planned for a long time. He spoke of the bloodshed in the surrounding area and the expectation for a solution to the Cyprus problem, after the election of mr. Î‘ÎºÎ¹Î½Ï„Î¶Î¯ in the leadership of the Turkish Cypriots. “As teachers we played a bad role in the past creating hatred and sharing in people’s minds. We suffer from the separation. The current event can be a good example for all Cypriots”.
Since 1963 they have shared in the couple, noted mr. Î•Î»Ï„Î¶Î¯Î» saying that they need more cooperation, to exchange views and ideas and expressing the view that teachers have an important role in the solution of the Cyprus problem. “We as teachers need to knock down the wall in people’s minds. This is the great mission. Today is an important energy and a good start”. He also noted that it is gratifying that they see new faces.