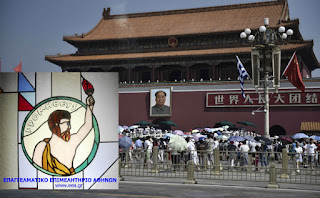 The president of the Professional Chamber of Athens (E.E.A.) mr. John Î§Î±Ï„Î¶Î·Î¸ÎµÎ¿Î´Î¿ÏƒÎ¯Î¿Ï…, had the honor to represent small and medium-sized businesses in the country as well as the ÎµÏ€Î¹Î¼ÎµÎ»Î·Ï„Î·ÏÎ¹Î±ÎºÏŒ institution in the… business and political mission carried out in China and the head of which was prime minister Tsipras. During the visit of the president of the E.E.A. he met Jack Ma, founder and shareholder of the largest company of electronic sales in the world, the chinese Alibaba and discussed ways of cooperation of the Greek small and medium-sized enterprises with the chinese colossus. The President of the Professional Chamber of Athens, pointed out:
“In the meetings that we had in the Forum of Greek and Chinese firms had the opportunity to see the fantastically sizes of the Chinese enterprises and the possibilities for the export of Greek products. The talks showed the moods of the Chinese Government for investments in Greece and, indirectly but clearly, the Chinese prime Minister dreams of Silk road which is the most important passage, since ancient times, is our country. The seven agreements reached and signed in the presence of the Minister mr. Stathakis and his counterpart, Chinese Minister, of course, and it’s success, but too small for the size of the trade of the two countries.E.E.A. it is proud that has contributed decisively to place the appointment of mr. Tsipras with the founder and largest shareholder of Alibaba, Jack Ma, a company that works with 10 ec. small and medium-sized enterprises.
As E.E.A. we want to stress that only reinforced the Greek small and medium-sized enterprises, aimed no longer in development paths, will be born the hope for the recovery of the Greek economy, something that is clearly our main goal and we strongly believe that in the end our efforts will be vindicated”.
However, a deeper benefits for the Country and businesses, we can highlight the following:
China choose our country as a stable economic gateway to eastern and western Europe.
Greece has the opportunity to utilize productively the chinese are interested in and develop investments, exports and business cooperation.
The agreements with China are a signal to investors of the whole world that Greece is changing and is converted into the field of investment and development.
For small and medium-sized businesses are opened fields of individual and collective cooperation without limits with an economy that leaves no opportunity untapped.
The purpose of the participation of the Professional Chamber of Athens, the mission was: To open up the channels for the development of Greece, through business partnerships and new investments. The first step was completed successfully. Remaining the next to achieve what we want.
Source