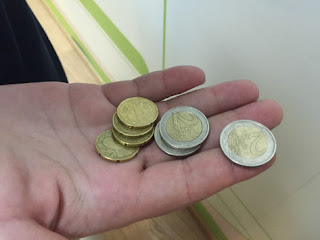 Came the investigation of Eurostat to show that Greece is not only Î“ÎµÏ‰Î³ÏÎ±Ï†Î¹Î¹ÎºÎ¬ and economically in the Balkans…
As a warning for basically five years ago, Paul Thomsen that Greece is a balkan country that no longer compare yourself only with Romania and Bulgaria in the levels of poverty, as a percentage of the population, or 35.7%, i.e. 3.8 million people poor in Europe, our country is in a bit of a better position only in comparison with the above two countries.
The situation, however, tends to become worst as it is already in the issue of employment is discussed further reduction of the lower wages, especially for young people under 25 years of age even in the 545 euros, while for those who are not fortunate enough to have a permanent full-time job already, wages have fallen to the level of 400 euro or below.
Yes, the law ÎšÎ±Ï„ÏÎ¿ÏÎ³ÎºÎ±Î»Î¿Ï… adds to the above a percentage of a whole army of nouveaux pauvres pensioners as it comes to add the third in a series of reduction in the rate of replenishment ease acute 40.7%.
Kind of like that for those who retire after 13 May 2016, the pension is 30% reduced than the others, while things are worse for those who do not have 40 years of insurance before they retire, as well as the… scissors are repeatedly dropping the amount of levels of hunger.
The substance of most of those who are 15 years are not entitled to than 345 euros a pension, while those who have 20 qualifying years receive a pension of just 384 eur national pension. On top of that the amount of the national will be added and the amounts attributable to the salary from 2002, and then at a rate of 40,7%.