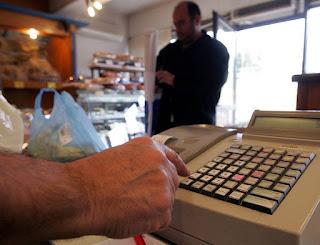 The increase in the VAT in the islands, not only not brought the expected results, but they also seem to gave a greater incentive for tax evasion…
According to Mega, the details of the budget for the period January â€“ April show that the revenue from VAT on islands like Mykonos are lagging behind their targets by 62%.
At the same time, to other islands with large tourist traffic, such as Santorini, Paros, Rhodes, Kos and Zakynthos, the deviation against the objectives range from 35% to 40%.
A similar picture is also reflected in the net revenues of the ordinary budget in the four months January – April, which fall short of the target by 488 million euros, but also in the revenue from VAT for the corresponding quarter lagging behind by 127 million euros compared with targets.
The picture seems to be better in May in terms of the net revenues of the ordinary budget, which is an increase of 473 million euros against the target, however, are not yet known by whom taxes and from which income is derived of this increase.
In order to “catch” the objectives of the budget and to avoid the debate on activation of the “cutter”, you have until the end of the year to be collected monthly revenues of 4 billion. euro.
Information, which relied on the Mega, indicate that if the revenue is not satisfactory, it is very likely to open the debate in October for preventive measures in order to avoid the activation of the “cutter”.
Source