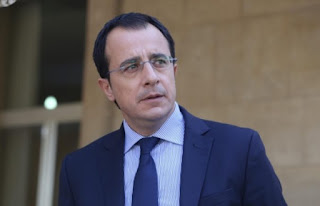 In force on and after the solution of the Cyprus problem will continue to is the treaty of establishment of the Republic of Cyprus said the…
government spokesman, Nikos Christodoulides in response to the statements of Mustafa Î‘ÎºÎ¹Î½Ï„Î¶Î¯.
Commenting on the show RICK’s “day to Day”, the statements Î‘ÎºÎ¹Î½Ï„Î¶Î¯ that this is not the Republic of Cyprus signed for the new situation in Cyprus, but the new land that will be created.
Mr. Christodoulides said that in the negotiations for the solution of the Cyprus problem, seek the transformation of the internal structure of the Republic of Cyprus from a unitary to a federal state, which is guaranteed by the funds are discussed.
There are, he said, many provisions in almost all chapters, so that there is no legal vacuum with regard to the further development of the Republic of Cyprus.
Reiterated that can not be absent the Republic of Cyprus in the discussion of the treaty of guarantee, in Geneva.
For the persistence Î‘ÎºÎ¹Î½Ï„Î¶Î¯ in a five-sided conference, mr Christodoulides sent the message that if we all want to arrive at a positive result can only support the participation of the five permanent members of the Security Council and of the European Union.
Nikos Christodoulides commented and the statement Î‘ÎºÎ¹Î½Ï„Î¶Î¯ that, if there is a conclusion to the issues of territory, property and governance, the next step will be the presentation of maps by the two sides, which will then focus on the aspect of security and guarantees.
He said that there is no such condition in the agreement of the first of December.
We should, he said, to see what he means the Turkish cypriot leader, since, as pointed out, this is the first time I made this statement which allows interpretations on the conditions for transition of the negotiations to the next stage.
Mr. Christodoulides expressed the certainty that the issue will be discussed at the level of the negotiators.
Source