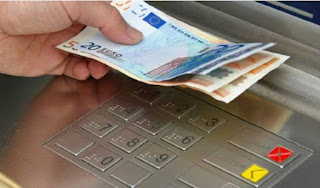 A very good news comes to “rock the boat” as expected, very significant changes in the Capital Controls that will give “breaths” to the Greek economy…
Eight proposals for the further gradual lifting of capital restrictions, have been submitted by the banks, as recorded in the Documentation on the Operation of the Banking System published today by the Greek Union of Banks.
As mentioned in the overview of the SCF, on 28 January 2017 closed nineteen months from the start of the bank holidays of short duration and, from 18 July 2015, restrictions on cash withdrawals and transfers of funds. Since then, the deposits in the banks in the country have gradually increased while the use of the mechanism of ela (ELA) decreased by 49%.
Taking into account the current data of the Greek economy and the financial system, the EPC, already by the end of November 2016, has filed eight specific proposals for the further gradual lifting of restrictions in order to:
1. Cash not taken a day or days to be able to be taken cumulatively up to the amount of two thousand (2,000) euros in the space of one calendar month (from 840 euro per two weeks today).
2. To allow: a) to open new current accounts or ÎºÎ±Ï„Î±Î¸ÎµÏ„Î¹ÎºÎ¿Î¯ and be added to the co-owners of the already existing even if it is created a new customer code (Customer ID) from the bank, and (b) to be activated dormant, within the meaning of law. 4151/2013 (A 103), accounts.
3. You can withdraw cash up to a percentage of 60% in total (from 30% today) of sums of money which, after the entry into force of the relevant amendment, will be credited with transfer credit from a bank that operates abroad, in bank accounts of the beneficiaries of legal entities and natural persons.
4. To be included explicitly in the applicable provisions of paragraph (f) of para. 11 of article first of the Act of Legislative Content, as from time to time amended and in force, and transported from abroad cash amounts credited to accounts held with a bank operating in Greece and are the result of the clearing of transactions payment cards (debit, credit and prepaid) issued by a provider of payment services abroad (payment cards international).
The non-explicit inclusion of certain transactions in the “free” capital of a Greek company has led several of these (tourism, hotel, airline, etc) in the signature of new or activation of existing, before the 18/7/2015, contracts, acceptance of card payments with institutions accepting transactions card abroad, creating a clear competitive disadvantage for the banks and other institutions accepting transactions to payment card operating in the country.
5. To allow for the acceptance and execution of transfer of funds to abroad from banks up to the amount of two thousand (2,000) euros per customer code (Customer ID) and per calendar month with a simultaneous doubling of the existing monthly limit approvals (up to 106 million. euros versus 53 million. euro today).
6. To allow the transfer of custody abroad for existing clients.
7. Be handled directly by the branch network of the banking transactions of legal persons or professionals abroad in the framework of their business activities, which do not exceed thirty thousand (30.000) euros each, per customer, per day, without the obligation to store bank, the relevant invoices and other documents and supporting documents.
This proposal will reduce the administrative costs of banks and reduce the supplies to small businesses and freelance professionals for the transfer of funds abroad for the purchase of goods and services against documents.
8. To amend point iv. of the component (b) of paragraph 2 of article 6 of number. 6/27.7.2016 the Commission decision Authorisation of Banking Transactions, as amended by decision no. 9/22.9.2016 Commission decision Authorisation of Banking Transactions as follows: “iv. the amount of the requested transfer of funds abroad, assembling with the amount that has already been approved within the month by the entire banking system of the country does not exceed cumulatively for the same month, 180% of the maximum monthly value of imports/intra-community acquisitions for the period 01/01/2015-31/12/2016”.
Under the current regime, as many companies are start-ups (start after 1 October 2014) can perform transfers of funds abroad without giving effect to the element of the historicity of 140%.
On the contrary, as many companies are not start-ups and had low imports in the last period, are often forced to delay their payments as it does not meet the criterion of historicity of 140%. This, however, is not conducive to their efforts to develop.